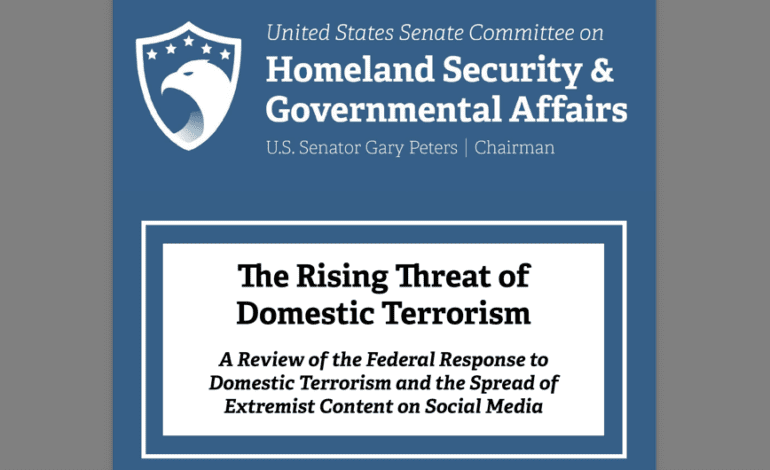 A report says the FBI and Department of Homeland Security (DHS) have failed to track data on domestic terrorism, including White supremacist violence, despite being required by a new law to do so.

This week, U.S. Sen. Gary Peters (D-MI), chairman of the Senate Homeland Security and Governmental Affairs Committee, released a new report detailing the results of his investigation into the rise of domestic terrorism, including White supremacist and anti-government violence.

The report found that the DHS and FBI have failed to effectively track and report data on the domestic terrorism threat despite being required to do so by a 2019 law Peters spearheaded.

The investigation also found that while independent experts and national security officials call White supremacist and anti-government violence the most significant terrorist threat facing our nation today, this lack of data has limited Congress’ ability to determine whether counterterrorism agencies are allocating resources to effectively address the growing threat posed by domestic terrorism.

The investigation also found that social media companies’ current incentive structures are designed to generate revenues and keep users engaged and – as a result – product development processes do not incorporate safety and platforms’ recommendation algorithms and other products end up amplifying dangerous and radicalizing extremist content, including White supremacist and anti-government content.

The report offers recommended actions that lawmakers should take to hold the DHS, the FBI and social media companies accountable for failing to provide transparency on how they are working to counter the threat of domestic extremism.

“From the horrific shooting at the Tree of Life synagogue to the tragic January 6th attack on the Capitol to the deadly shooting targeting the African American community in Buffalo, and too many other attacks – we have seen firsthand how violence inspired by White supremacist and anti-government extremists terrorizes communities across the nation,” Peters said. “DHS and FBI’s inability to provide comprehensive data on the domestic terrorist threat creates serious concerns that they are not effectively prioritizing our counterterrorism resources to address the rising domestic terrorist threat.”

The report’s key findings include: Kevin Seefried holds a Confederate flag after illegally breaking into the U.S. Capitol on Jan. 6, 2021. Seefried was later arrested by the FBI, as were more than 100 others who stormed the highly restricted building that day, a siege which led to the death of a police officer. Photo: Reuters

The report makes key recommendations, including:

“My investigation also found that social media companies are contributing to the spread of domestic extremist content that often translates into this real world violence by prioritizing revenue and user engagement over online safety,” Peters said. “My report makes important recommendations about the need to increase transparency and accountability to address how these platforms are spreading dangerous and extreme content.”

According to national security officials and independent organizations, the number of domestic terrorism attacks inspired by White supremacist and anti-government ideologies has continued to rise.

According to the Anti-Defamation League, from 2012 to 2021, domestic extremists have been responsible for 443 deaths, with more than 50 percent of the deaths caused by White supremacists. Peters’ report shows that while our nation must continue to monitor and combat international terrorism, the federal government must utilize a data-driven approach to align resources to address the threat of domestic terrorism.

Peters’ report also found that the business models of social media companies – particularly Meta, TikTok, Twitter and YouTube – have also allowed the rapid spread of extremist ideologies. According to one study cited in the report, social media played a role in the radicalization of perpetrators involved in more than 90 percent of extremist plots or activities in the United States in 2016 alone.

During the course of his investigation, Peters found that while social media companies often tout investments in trust and safety, the platforms continue to amplify White supremacist and anti-government content; and they lack incentives and safeguards that would ensure their products are not contributing to the spread of this harmful rhetoric. Despite repeated requests for these companies to provide more information on how they are working to prevent the spread of extremist content, the platforms provided little transparency.

The investigation builds on Peters’ efforts to examine the rising threat of domestic terrorism, including White supremacist and anti-government violence.

Peters led the Senate’s bipartisan investigation and released a joint bipartisan report on the security, planning and response failures related to the violent and unprecedented attack on the U.S. Capitol by domestic terrorists on January 6, 2021.

In June, he convened a hearing with experts focusing on the threat of White supremacist extremism, including violence inspired by racist ideologies such as the Great Replacement Theory.

Demonstrators in Washington, D.C. call on Egypt to #FreeAlaa