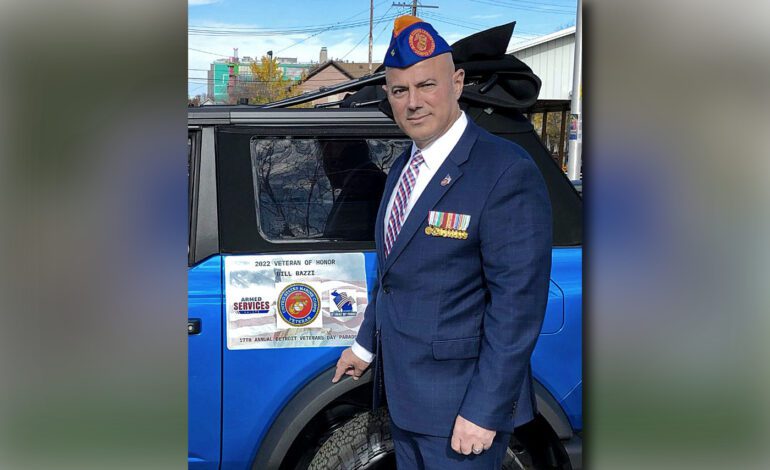 DEARBORN HEIGHTS – Mayor Bill Bazzi, a U.S. Marine Corps veteran, was recognized by the Metropolitan Detroit Veterans Coalition as its 2022 Veteran of Honor last week, during the its 17th annual Veterans Day Parade in Detroit’s Corktown.

Bazzi, a retired U.S. Marine Corps gunnery sergeant, served the Corps in several capacities, including multiple worldwide deployments throughout his 21-year military career. Prior to his current role as Dearborn Heights mayor, he was an engineer with the Ford Motor Company (where he served as past president of the Ford Veterans Network Group).

Prior to that, he was an engineer with the Boeing Aerospace Company. He is a well-known and respected supporter of local and regional veterans’ organizations and the services they provide – serving in the capacities of both participant and volunteer leader. Most recently, he served as a three-term past commander (and current board member) of the Dearborn Area Allied War Veterans Council. “I am honored to be named as this year’s Metropolitan Detroit Veterans Coalition Veteran of Honor,” Bazzi said. “It is certainly a highlight in my years of experience as a veteran and associate of this great organization. As a proud retiree of the United States Marine Corps, it humbles me to join the distinguished list of veterans who have accepted this recognition before me. It will be an ongoing reminder of the importance of our continued work as ambassadors of service as we continue our focus on recognizing and honoring the sacrifices of all veterans, continuing our work to provide assistance to our vets, and helping foster the importance of patriotism throughout our communities.”

The Metropolitan Detroit Veterans Coalition is a Michigan-based volunteer organization dedicated to providing veterans of all military branches a platform to better serve their communities.