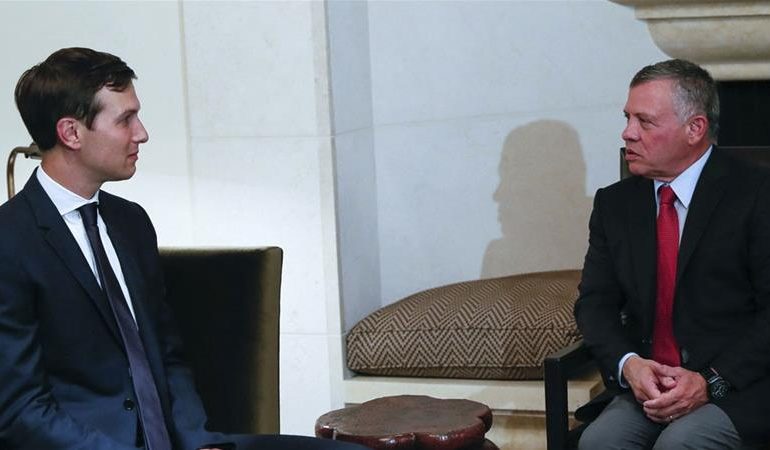 Kushner's with King Abdullah of Jordan.

AMMAN/WASHINGTON — Four Arab states have backed the U.S. plan for the Israeli-Palestinian peace process, regardless of the position of Palestinian Authority (PA) President Mahmoud Abbas, an Israeli newspaper reports.

The Israel Hayom daily interviewed officials from Egypt, Saudi Arabia, the United Arab Emirates and Jordan who confirmed to Jared Kushner, President Trump’s senior adviser and son-in-law, and Jason Greenblatt, the U.S. envoy to the region, their support for the yet to be announced “deal of the century.”

The newspaper, which is owned by American billionaire couple Sheldon and Miriam Adelson (who are also supporters of Israeli Prime Minister Netanyahu), said that the officials interviewed by the daily also expressed their displeasure with Abbas’s insistence on refusing to meet Kushner and Greenblatt.

The PA officials have rejected meeting U.S. officials since the Trump administration controversially recognized Jerusalem as the capital of Israel, accusing Washington of pro-Israeli bias and as unfit to mediate in peace talks between Israelis and Palestinians.

According to Daniel Siryoti, the Arab affairs analyst for the Israeli daily, the leaders of the Arab countries Kushner visited were the ones who advised him to give an interview to the Palestinian newspaper Al-Quds on Sunday, where he sharply criticized Abbas’ ability to make a deal and said that the U.S. plan will be presented with or without his consent.

His comments underlined gaping divisions between Washington and the Palestinian leadership that have widened since Trump recognized Jerusalem as Israel’s capital in December and moved the U.S. Embassy there, overriding decades of U.S. policy.

Siryoti quoted an unnamed senior Egyptian official as saying that the leaders of the Arab countries visited by Kushner and Greenblatt stressed that the official Arab positions conveyed to U.S. officials reflect the “unanimous” positions of Saudi Arabia, Egypt, Jordan and the UAE.

According to the official, the leaders would also not oppose any attempt by Washington to override Abbas’ interests.

UAE collaboration with Israel goes back to 1990s, recently focuses on Iran

“Despite the strategic mistakes made by Abu Mazen ‎‎(Abbas) and his people,” the Egyptian official said, “Kushner and Greenblatt were ‎told, in no uncertain terms, that the Palestinians ‎deserve an independent Palestinian state with East ‎Jerusalem as its capital.”‎
‎
“Kushner agreed to the Arab nations’ demand and made ‎it clear during his meetings with [Jordan’s] King ‎Abdullah and [Egyptian] President [Abdel Fattah] el-‎Sisi that the interests of the Palestinian people ‎will not be harmed if the regional peace plan is ‎introduced without the Palestinian leadership’s ‎cooperation,” he said.

Israel Hayom also quoted a senior Jordanian official, who warned of the Palestinian leadership being rendered “irrelevant with respect to the peace process.”
‎‎
“Arab states will not be the ones to throw a wrench ‎in the wheels of the peace process and that Abbas’ ‎continued refusal to work with the Americans will ‎lead to a regional peace plan being launched without ‎him,” the Jordanian official said. ‎

Osama Hamdan, member of the Hamas movement’s politburo in Lebanon, told Al Jazeera the Arab states are being used by the U.S. to exert pressure on the Palestinian Authority.

Hamdan warned that any acceptance of the U.S. peace plan by a Palestinian top-level official would lead to chaos for the Palestinian population. President Trump said on Monday that a lot of progress had been made in the Middle East, but he declined to say when the White House would release its plan for peace between Israelis and Palestinians.

In their third summit since Trump took office, King Abdullah and Queen Rania received a warm reception at the White House.

“We’re doing very well in the Middle East,” he said. “A lot of progress has been made… and it really started with the end of the horrible Iran deal. European allies opposed that move. That … was a disaster and things are a lot different since we ended that.”

He thanked King Abdullah, whom he called “a friend”, and lauded his “incredible work” on humanitarian efforts and the issue of refugees.

Jordan hosts more than 1.3 million refugees, mostly those who have left neighboring Syria since the war started in 2011.

Bilateral ties, the situation in southern Syria bordering Jordan and the peace process topped the agenda of the White House meeting. Following economic protests and a change in government this month, the king is seeking U.S. support and expansion in trade and aid from Washington.

Last February, the Trump administration approved increasing the annual aid to Jordan to $1.3 billion, and King Abdullah met the treasury and commerce secretaries on Friday to discuss economic initiatives.

The U.S. plan is expected to propose solutions to core issues in dispute between the Israelis and Palestinians, such as borders, the future of Israeli settlements, the fate of Palestinian refugees and security. Prince William paid the first official British royal visit to the Palestinian Territories on Wednesday, touring a refugee camp and telling Palestinians, “You have not been forgotten.”

It was one of the most politically sensitive visits yet undertaken by the prince, on a day which took him from the Israeli coastal city of Tel Aviv to the hilltop offices of Palestinian President Mahmoud Abbas in the occupied West Bank.

William, who is second in line to the throne, received red-carpet treatment as he inspected an honor guard at the Muqata, Abbas’s headquarters.

“My sentiments are the same as yours in hoping that there is a lasting peace in the region,” the prince told Abbas.

“My message tonight is that you have not been forgotten,” the prince told a gathering of Palestinian civil society, business and religious leaders during  a speech at the residence of the British Consul-General in Jerusalem. “It has been a very powerful experience to meet you and other Palestinians living in the West Bank, and to hear your stories. I hope that through my being here and understanding the challenges you face, the links of friendship and mutual respect between the Palestinian and British people will grow stronger.”

After his meeting with Abbas, the prince drove to Jalazone refugee camp to visit a health center and a school, both run by the United Nations Relief and Works Agency (UNRWA).

More than 9,000 Palestinian refugees live in Jalazone, a crowded cluster of cinderblock and concrete buildings that borders a large Israeli settlement.