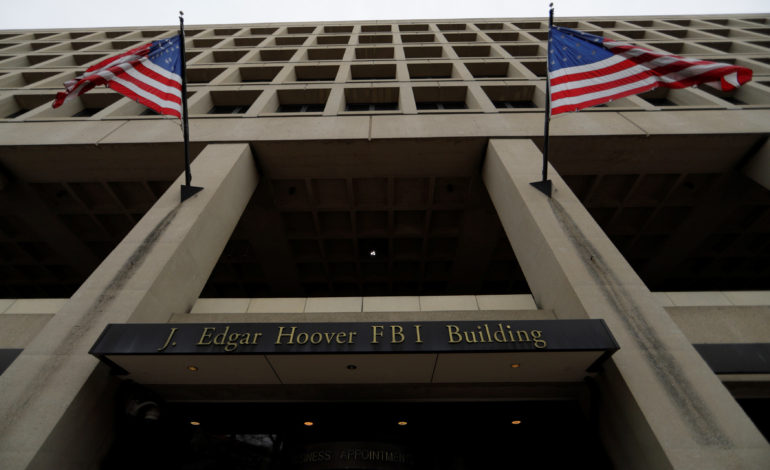 J. Edger Hoover FBI building in Washington, DC
WASHINGTON, D.C. — There were nearly twice as many hate crimes against Arab Americans in 2015 and 2016 than were reported by the FBI, underscoring the shortcomings of official statistics at a time of rising hate crime in the country, according to a comprehensive report on hate crime by the Arab American Institute in Washington.
Using data collected by state law enforcement agencies, the institute estimated that there were 79 anti-Arab incidents in the United States in 2015 compared with 40 reported by the FBI, and 88 such incidents in 2016, compared with 58 shown in the bureau’s official report. Among four major case studies, the report highlights the murder of three young Arab American Muslims near the campus of the University of North Carolina at Chapel Hill in 2015 “on account of their religious affiliation.” Texas and Michigan, two states with relatively large Arab American populations, showed glaring discrepancies between state and federal hate crime data in both 2015 and 2016. In Michigan, for example, state authorities reported 14 anti-Arab hate incidents while the FBI reported just one.

The institute said the FBI continues to undercount the number of bias incidents targeting Arab Americans despite restoring an anti-Arab category to its closely watched hate crime statistics three years ago.

“The Arab American community hasn’t faced this level of targeted violence since the months following 9/11,” said Arab American Institute Executive Director Maya Berry.  “And the discrepancies found in our report show that the number of hate crime and bias incidents against Arab Americans and American Muslims is even higher than we previously thought.”

The findings come amid a spike in hate crimes in American cities in recent years and calls for more accurate data to understand and respond to the problem.

The FBI has acknowledged that its statistics undercount hate crimes in part because they are based on voluntary reporting by local law enforcement agencies.

The FBI did not respond to questions about the report.

The Bureau of Justice Statistics, the statistics arm of the Justice Department, said its data “show about 30 times more hate crimes than were reported by the FBI.”

In 2015, the FBI, under public pressure in the wake of a deadly shooting at a Sikh temple, added eight new bias categories to its closely watched annual hate crime report. One was anti-Sikh; another was anti-Arab, replacing a category removed years earlier.

The goal was to fill critical gaps in a report that serves as the primary source of information on hate crimes in the United States for law enforcement agencies, advocates and policymakers. But while the additions were welcomed by users, the Arab American Institute (AAI) said the report sharply undercounts not just anti-Arab incidents but all hate crimes.

Their researchers found that between 2012 and 2015, more than 1,900 hate crimes reported by state law enforcement agencies were left out of official FBI statistics.

“While state (Uniform Crime Reporting) programs are collecting and publishing their own statistics, these are not being translated to the FBI’s reporting on hate crimes,” the report said.

The undercounting and discrepancy between state and federal hate crime data highlight the damage caused by the removal of the anti-Arab category from the FBI’s hate crime data collections over two decades ago, the report said.

The AAI researchers found that despite the removal of the category, many states continued to report anti-Arab hate crime statistics to the FBI for more than a decade, but the FBI published them as aggregated data under the category “other ethnicity/national origin.”

“While looking at anti-Arab hate crime data at the state and federal level in the course of researching this report, it became apparent these incidents are severely underreported,” the report said. “Today, in a period of burgeoning xenophobia and increased anti-Arab and anti-Muslim sentiment, neither the government nor the American public can afford to overlook the nature and extent of violence targeting Arab Americans or American Muslims.”

Brian Levin, director of the center for the study of hate and extremism at California State University at San Bernardino, said undercounting of hate crimes remains a problem despite “improved reporting efficiencies” in recent years.

“We are concerned not only about recent increases but underreporting in communities like Arab Americans’, who may be less likely to interact with law enforcement because they are recent immigrants or foreign language speakers,” Levin said.