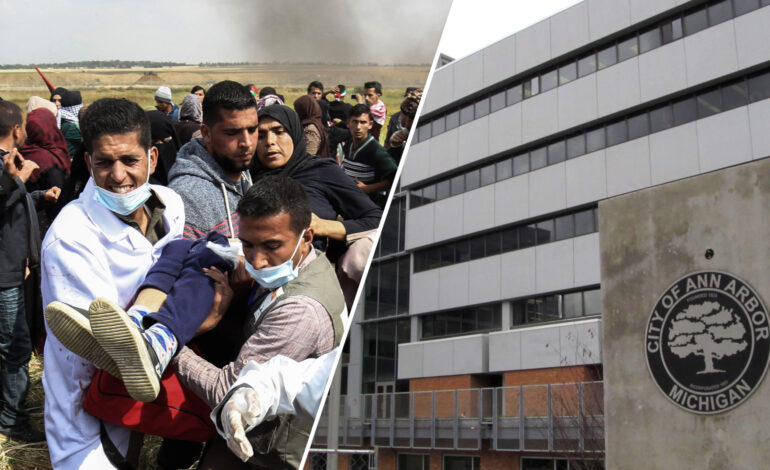 ANN ARBOR — A member of the Ann Arbor City Council has sponsored a resolution to hold a community conversation regarding Palestine.

The resolution, titled “Resolution for the City of Ann Arbor to Hold a Community Conversation about the Palestinian People and Palestinian-Americans”, seeks to hold a community forum on the topic by July 1.

The resolution comes on the heels of a recent 213-page report by the New York-based organization Human Rights Watch (HRW) that says Israel’s actions against Palestinians meet the legal definition for crimes of apartheid as set out by the Rome Statute. The HRW report is titled, “A Threshold Crossed: Israeli Authorities and the Crimes of Apartheid and Persecution” and is available on its website.

HRW has called on the U.N. to verify the claim and then apply an arms embargo against Israel until verifiable steps are taken to end such crimes.

The resolution in Ann Arbor, sponsored by Council member Kathy Griswold (D-Second Ward), is set to be on the Council’s agenda on May 3. The resolution recognizes that the City Council recently unanimously passed a resolution condemning anti-Asian hate crimes. Some Council members at that meeting expressed that the resolution didn’t go far enough and a former councilwoman was also praised for her advocacy for Palestinian rights in the 70s.

It goes on to say:

“Whereas, for many years since then, we have been asked, in our meetings, to provide moral guidance against the harm being done to the Palestinian people through our tax dollars;

Whereas, the International Criminal Court (ICC) is currently investigating Israel for crimes against the Palestinian people. It takes years for the ICC to arrive at such a weighty decision;

Whereas, the academic community across the United States (the University of Michigan included) has cast its vote also. Approximately 90 student governments have voted for resolutions demanding boycott, divestment and sanctions against Israel for its human rights violations.”

MLive reported this week that other council members, including the only Palestinian American member on the Council, oppose the resolution in its current form.

“It’s a conflict that all parts of the globe are aware of,” Council member Ali Ramlawi told MLive. “The U.N. has spent countless hours and countless resolutions have been passed over 73 years. I’m not sure what the city of Ann Arbor is going to be able to do to move the needle.”

Ramlawi said he had “personal positions on this issue”, which were separate from his “political position” on the Council, but that he knows the resolution could start a conversation on the topic. Another council member is against the resolution in its current form, but welcomes community input on the topic. Others, including Ann Arbor Mayor Christopher Taylor, question whether a city council has the jurisdiction over international matters.

Griswold herself said she has no agenda other than to create a forum for a respectful conversation and wants to acknowledge the work of anti-Israel protesters regularly speaking at Council meetings for years. Savabieasfahani asked how Palestinians in the Ann Arbor community must feel when Congress gives Israel $38 billion in military aid, “while Israel is still gunning down thousands of human rights marchers in Gaza?”

“Hundreds of them died,” she said. “Thousands were maimed and crippled for life. Imagine how Palestinians in Ann Arbor feel when their own mayor refuses to say a word about what is happening to their loved ones in occupied Palestine.”

Savabieasfahani urged people to sign her Change.org petition for the Ann Arbor City Council to consider a resolution against military aid to Israel and to join in on the May 3 conversation around Griswold’s resolution.