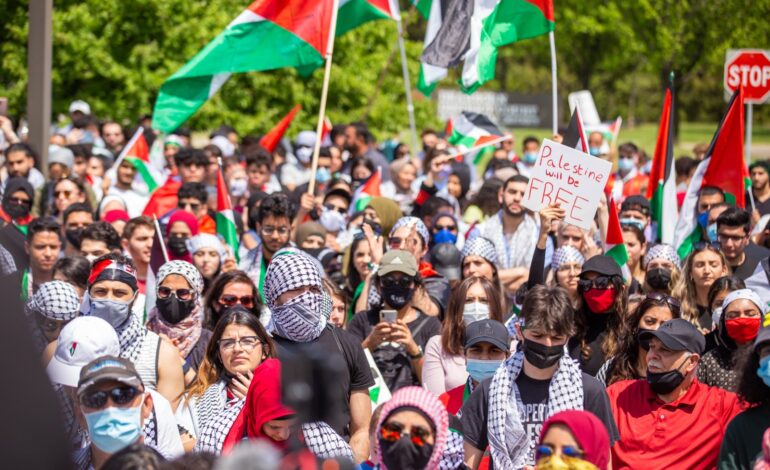 DEARBORN — On Tuesday, more than 3,000 local activists and protesters returned to the streets for three separate rallies and marches throughout the day in response to President Biden’s planned visit to the Ford Motor Company’s electric vehicle plant in the city’s Southend.

The protests arose in reaction to Biden expressing unwavering support for Israel, including the approval of $735 million in weapons sales toward Israel’s “right to defend itself” with near international impunity from the U.S. and other allied countries. This U.S. financial endorsement is in addition to the $3.8 billion per year already granted to the Israeli government.

The Democratic House Foreign Affairs Committee chairman backed away from an earlier planned letter asking the Biden administration to delay the $735 million weapons sale to Israel on Tuesday, despite opposition from some of the committee’s members.

Meanwhile, Palestinians have seen no end or respite from the brutal air strikes from Israel, as Gaza’s health ministry reported on Tuesday that Israeli air strikes had killed at least 217 Palestinians, including 63 children and 36 women, since May 10. Millions of Palestinians across Israel, the occupied West Bank and Gaza went on strike to protest continued air strikes and violent crackdowns by Israeli forces.

The ministry has also said that Israel is preventing the International Committee of the Red Cross (ICRC) from accessing certain health facilities in the Gaza Strip. More than 52,000 Palestinians have been displaced by Israeli air strikes that have destroyed or badly damaged nearly 450 buildings in the Gaza Strip, the U.N. aid agency said on Tuesday.

The U.N. Security Council ended Tuesday’s session without consensus on a ceasefire call. The U.S. has blocked a ceasefire resolution from the council three times. Biden’s visit to Dearborn coincided with an international call from Palestinians in occupied Palestine on May 18 for a “Day of Action in solidarity with the Palestinian uprising and general strike.”

A press conference was also held at 10 a.m. by religious leaders and concerned community members ahead of Biden’s visit at the American Moslem Society (AMS) mosque in the Southend of Dearborn.

Protest banners were strewn on the freeway overpasses of I-94 westbound and Addison St and I-75 northbound and Rosa Parks Boulevard, bordering Dearborn and Detroit. The banners stated, “Sanction Israel Now” and “Biden End U.S. Aid to Israel & Invest in Communities 3.8 Billion/ YR.” After several hours, the banners were taken down by local police. A banner on I-75 northbound and Rosa Parks Boulevard in Detroit. Photo courtesy: Zena Ozeir

“We are sending a message right now, not only to the presidency,” said Osama Siblani, publisher of The Arab American News. “This is for legislators and others in power. When we have human rights violations and ethnic cleansing, this should be stopped. Palestinians have a right to exist. We will not remain silent, not in Iraq, Yemen, Libya or anywhere else.”

Siblani explained ahead of their visit yesterday, the Biden administration reached out to 20 community leaders for a meeting. Although details were kept confidential, Siblani assured the crowd he advocated to Biden his unequivocal support toward the community’s concerns for Palestinians. People are sick and tired of watching their tax dollars being spent abroad to destroy people’s lives rather than to build. We have a lot more work to do in this country — Dr. Abdul El-Sayed

“This is about ideas, this is about whether or not we stand up for human rights or justice,” El-Sayed said, then gestured to the crowd of protest-goers to continue. “People are sick and tired of watching their tax dollars being spent abroad to destroy people’s lives rather than to build. We have a lot more work to do in this country.”

Zahr told the crowd that “Sheldon Adelson, who was born in Boston and has no connection to Palestine, was able to be buried in Tel Aviv. My four grandparents were all born in Palestine and they are buried in California, Delaware and Jordan. And not because they wanted to be. It’s because they were ethnically cleansed and never allowed to return.”

Above: Protesters gather at the Dearborn Police Station and march out, Tuesday, May 18. – Photos by Imad Mohamad/The Arab American News

Rula Aoun, director of the Arab American Civil Rights League (ACRL), came out to “show solidarity and support for the Palestinian people and their struggle.”

“I want to show the community that everyone should take part no matter what position or age,” she said.

Anoun shared that the ACRL has been an avid supporter of Palestinians for years, dedicating organizational events for the Palestinian cause, including hosting Ahed Tamimi, a notable Palestinian young radical activist, as a keynote speaker on a U.S visit.

Community member Zeina Sobh got on the stage to invite the crowd to a protest for Palestine she is organizing at the Downtown Detroit Riverfront on Sunday, May 23 at 1 p.m.

The rally transitioned into a spirited march of protesters holding red, black, white and green Palestinian flags and other Arab national flags, who headed eastbound down Michigan Avenue and back to the Dearborn Police Station before dispersing soon after.

Simultaneously around 1:30 p.m., general coordinators from the Palestinian Youth Movement-Detroit (PYM), the Yemeni Liberation Movement (YLM) and the Filipino youth organization, Anakbayan-Detroit,  jointly hosted a separate solidarity protest with more than 500 diverse community attendees at Lapeer Park, one mile from the Ford Rouge Electric Vehicle Center in the Southend of Dearborn.

Streets were barricaded by Dearborn Police vehicles en route to the Southend, including the main entry road of the intersection of Michigan Avenue and southbound Oakman Boulevard.

The rally began with a water ceremony led by local active indigenous community organizers. Several community activists and cultural leaders spoke to the crowd in the pre-march rally, including activists from Detroit Will Breathe, Iman Saleh of YLM and Nada Dalgamouni, global education director of the International Institute of Metropolitan Detroit (IIMD).

Hundreds of people gathered for a five-hour rally and marched through the Southend, crossing the main street of Vernor Highway into both sides of the residential neighborhood.

Above: Protest for Palestine, amid President Biden’s visit to Dearborn, in the city’s Southend. – Photos by Rasha Almulaiki/The Arab American News

Adel Mozip, Dearborn Board of Education trustee, a Yemeni American and longtime Southend resident, stood outside his home as the protesters marched by.

“This is great. Their voice has got to be heard,” Mozip said. “It’s awful what’s going on (in Palestine). Hopefully our leaders will hear our voice and do something about this.”

“When we are talking about racism, we are talking about power,” began Sahar Faraj, general coordinator of the Palestinian Youth Movement (PYM)- Detroit chapter. She addressed the crowd as they stopped for a brief rest under the thicket of trees of the residential Southend.

”You cannot say free Palestine without also saying ‘Black Lives Matter’ or you’re confused when you are marching in the streets,” Faraj said. “Biden is here today. He is a common thread, or at least sits in the vicinity of a thread that fucked us all over, right? American imperialism, European imperialism. This is our people’s struggle, it’s discipline, it’s not fun. We walk with principle.”

“If you want your resolution to be intersectional,” joined Yara Beydoun, YLM organizer, “if you really want to say our struggles are one struggle: that Black Lives Matter, Free Palestine, end the Yemen blockade, protect indigenous women, free the water… you have to know where you stand.”

The stimulated crowd then continued the march back to the Lapeer Park recreational shelters for final chants and speeches by the organizers centered on sustaining allyship and momentum building toward collective liberation.

Other community protests and events are currently being planned this week. Details are forthcoming.