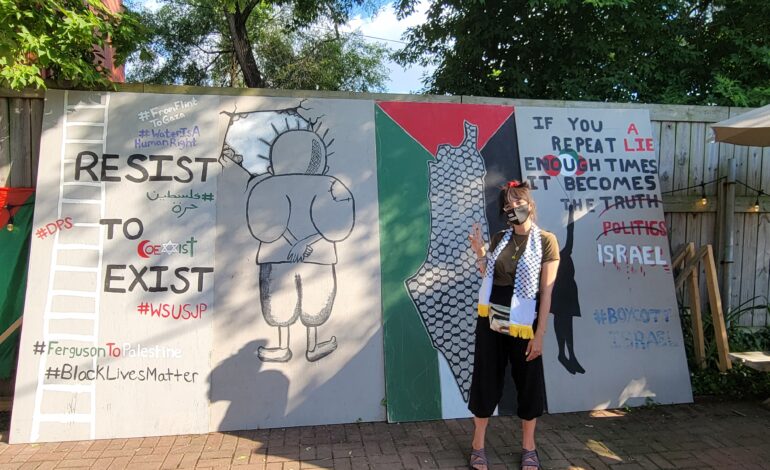 DETROIT- Pie-Sci, a popular pizzeria near Wayne State University, has collaborated with Palestinian activists to create a delicious new pizza special for the week, the “Musak It To Me.” Pie-Sci also collaborated with renowned Detroit pastry chef Lena Sereini for the special.

On Wednesday afternoon, Pie-Sci hosted a “Pizza and Palestine conversations over pie” event. The event was attended by some two dozen people in the pizzeria’s back patio, where posters, banners and informational flyers surrounded the open space. Arabic music played over a speaker as attendees gathered and enjoyed the specialty pizza.

We are fighting for the Palestinian cause and getting our voices heard. In the Detroit restaurant industry alone, I don’t think enough people know about what’s going on and I’m just here to use my voice and to educate my colleagues — Lena Sereini, Detroit pastry chef

A mock apartheid wall mural has been painted by Students for Justice in Palestine at Wayne State University (SJP-WSU). The mural took center stage as a visual representation of the Apartheid Wall stretching 440 miles along the West Bank. Other images depicted both symbols of occupation and historic images of resistance, including Handala, a representation of the Palestinian people and resistance.

“We are fighting for the Palestinian cause and getting our voices heard,” Sareini said. “In the Detroit restaurant industry alone, I don’t think enough people know about what’s going on and I’m just here to use my voice and to educate my colleagues.

“I’ve been a pastry chef in the industry for the last five or six years. I’ve made connections with restaurants all over the city and it just hurts to see my industry silent when my people are being murdered across the world, you know; and so hopefully this shakes up the systems and more people start talking about this. Because we’re not afraid to be silent anymore.”

Above: Pie-Sci in Detroit hosts a “Pizza and Palestine conversations over pie” event. All photos: Rasha Almulaiki/The Arab American News

Pie-Sci will donate all proceeds from the special to the Palestinian Youth Movement (PYM).

Amidst the 11-day onslaught of Israeli Occupation Forces on Gaza in May, another local Detroit restaurant, Flowers of Vietnam, expressed its support for the Palestinian people on social media.

Simultaneously, two other Palestinian events were held in the Metro Detroit area on Wednesday. Chef Omar Anani of the award winning local Morocaan restaurant, Saffron De Twah, partnered with the Thowra Dabke Dance Troupe to host a “Pop Up for Palestine: Dinner & Dabke Benefit” at Batch Brewery Co. in Detroit.

In Dearborn, New Generation for Palestine organized an event at Fordson High School, providing a space for students to speak on issues related to Palestine.