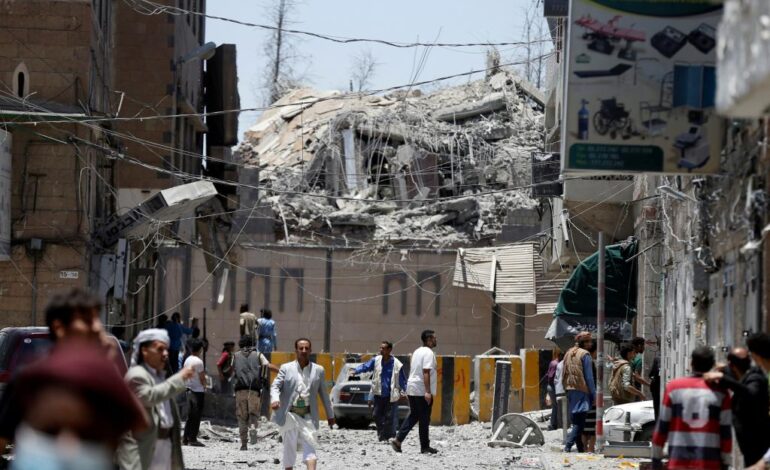 Aftermath of a military attack on the presidential compound in Sana'a by Saudi-led coalition forces in Yemen, 2018. Photo: Reuters

The Biden Administration has extended and re-designated Temporary Protected Status (TPS) for Yemen into 2023.

TPS allows individuals from nations experiencing war, natural disasters or extraordinary circumstances to live and work in the U.S. on a temporary basis. Yemen’s TPS status was set to expire on September 3.

The extension announced by the U.S. Department of Homeland Security (DHS) allows individuals already enrolled in the program to re-register for an extension of their status for 18 months, through March 3, 2023. Through the re-designation, eligible individuals who do not have TPS may submit an initial “Form I-821, Application for Temporary Protected Status.”

Approximately 1,700 current beneficiaries will able to retain their TPS status due to the extension. According to the press release, “The re-designation of TPS for Yemen allows an estimated 480 additional Yemeni nationals (or individuals having no nationality who last habitually resided in Yemen) who have been continuously residing in the United States since July 5, 2021, and have been continuously physically present in the United States since September 4, 2021, to file initial applications to obtain TPS, if they are otherwise eligible.”

“Yemen continues to experience worsening humanitarian and economic conditions that prevent individuals from safely returning to their homes,” said U.S. Secretary of Homeland Security Alejandro N. Mayorkas. “Therefore, I have decided to extend and re-designate Yemen for Temporary Protected Status. We will continue to protect and offer these individuals a place of residency temporarily in the United States.”

DHS said Mayorkas’ decision is based on a number of humanitarian realities in Yemen, including lack of access to food, water and healthcare; large-scale destruction of Yemen’s infrastructure; significant population displacement; an ongoing cholera outbreak since 2016; and the COVID-19 pandemic’s worsening of a dire economic and humanitarian situation. The conditions prevent Yemeni nationals and habitual residents from returning to Yemen safely, the agency said.

Forcing families back to a country which remains in a constant state of war and humanitarian crisis is life-threatening and immoral — U.S. Rep. Debbie Dingell (D-Dearborn)

U.S. Rep. Debbie Dingell (D-Dearborn) applauded the move by President Biden’s administration. Biden reversed former President Trump’s ban on immigration from countries like Yemen as one of his first major moves upon taking power this year. Biden also declared a halt to U.S. support for a Saudi Arabia-led military campaign in Yemen earlier this year.

“The looming expiration of TPS for the thousands of Yemeni citizens, including children, living in the United States creates uncertainty and fear,” Dingell said in a statement. “Forcing families back to a country which remains in a constant state of war and humanitarian crisis is life-threatening and immoral.”

Dingell has been leading figure in the call for TPS for the Yemeni people and ensuring humanitarian assistance for the country. Last month, Dingell led a group of 22 of her colleagues in calling on Biden to extend and re-designate TPS for Yemen, which she also has urged in years past, due to the ongoing armed conflict within the country. In May, Dingell led 78 members of the U.S. Congress in calling for an end to the Yemeni blockade. Dingell also called for an extension and re-designation of Yemen TPS in 2019.

“I have continuously called for this extension each year and worked across governments to ensure the safety of refugees,” Dingell added. “Today’s extension and re-designation of TPS is a sigh of relief for Yemeni people in the United States, but we must continue to be vigilant in ensuring critical aid to Yemen, especially for the 400,000 Yemeni children under the age of 5 that are on the brink of death from malnutrition, during this time of violence and suffering.”

The Council on American-Islamic Relations (CAIR) also commended the move by the federal government.

“CAIR welcomes the Biden Administration’s extension and renewed designation of TPS for Yemen,” said Robert S. McCaw, CAIR Director of Government Affairs Department. “We are urging all Yemeni nationals inside the U.S. to immediately consult with an immigration attorney to determine whether they may qualify for TPS or other forms of immigration relief. CAIR is now calling on DHS and the State Department to provide similar relief for Somali nationals whose TPS expires in September.”

For more information about eligibility requirements, visit www.uscis.gov/tps. Members of the community who need assistance can also contact Dingell’s Dearborn office at 313-278-2936.

Despite official Israeli objection, U.S. pushes ahead with Palestinian consulate in Jerusalem