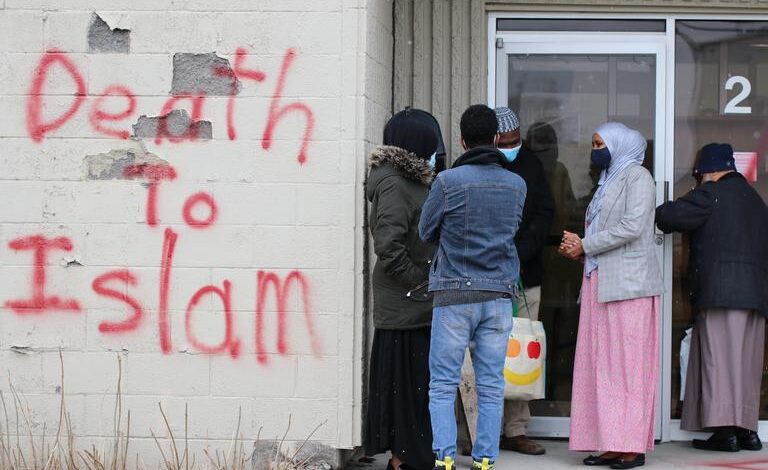 Residents in Moorhead, Minnesota stand outside the Moorhead Fargo Islamic Center, which was vandalized with islamophobic graffiti during the month of Ramadan in 2021. Photo: C.S. Hagen/The Forum

The Council on American-Islamic Relations (CAIR) has released a mid-year report documenting the state of anti-Muslim hate incidents in 2021.

The national Muslim civil rights and advocacy group says that since the start of the year, it has received hundreds of complaints from chapters across the country, and more than 500 at its national headquarters, regarding anti-Muslim hate crimes, discrimination, immigration and travel issues, school bullying incidents and more.

CAIR also has a branch in Michigan and has taken on major and often high-profile legal cases involving discrimination against the state’s large Muslim population.

The new report shows major trends over the last seven months based on the incidents reported to CAIR. It also highlights 38 of the most severe cases of anti-Muslim hate during that period, including hate crimes, harassment, school bullying, discrimination, hate speech and anti-mosque incidents.

“Our belief is that these cases can provide the public a glimpse of the day-to-day lives of Muslims in America who continue to face the deadly threat of Islamophobia,” the report says.

Significantly, CAIR says it saw an increase in these incidents during Israel’s assault on Gaza this year.

This spike in cases in May and June involved cases of vandalism and an attempted stabbing, and several physical assaults targeting Muslim women wearing the hijab.

For example, on May 13, the Tayba Islamic Center in Brooklyn, New York was vandalized and spray painted with “Death to Palestine” overnight.

It also observes the intensification of anti-Muslim hate acts in Canada, noting 11 reports in the media documenting violent anti-Muslim crimes in Canada during the first seven months of 2021.

On June 7, in London, 20-year-old Nathaniel Veltman jumped the curb in his vehicle in a deliberate Islamophobic terrorist attack that struck five members of the family, killing four of them and seriously injuring the 9-year-old. The child was later released from the hospital after recovering.

CAIR called on President Biden to condemn and confront the growing phenomenon of global Islamophobia following the deadly act of anti-Muslim terrorism.

The report says that while the Biden administration had not condemned or even commented on the Ontario Muslim family’s murder – the Canadian government acted swiftly by indicting Veltman on terrorism charges, along with four counts of first-degree murder and one count of attempted murder.

Recently, Canadian police reported that they documented a 7 percent rise in hate crimes in 2019.

In another example, on June 25, in St. Albert, an area of Edmonton, Alberta, two sisters wearing hijabs were held at knifepoint by a man making racial slurs. He pushed one of the Muslim women onto the ground, knocking her unconscious. Police believe the attack was motivated by hatred toward Muslims.

Other takeaways in the report are that public officials are frequently using anti-Muslim hate speech through social media avenues to marginalize American Muslims and that bullying against Muslim students continues to occur at rapid rates involving hate speech and physical attacks.

“It is our hope that this document will serve as a resource for lawmakers, the press, academics and the general public to help better understand the threat of Islamophobia in the United States and North America,” the report says.