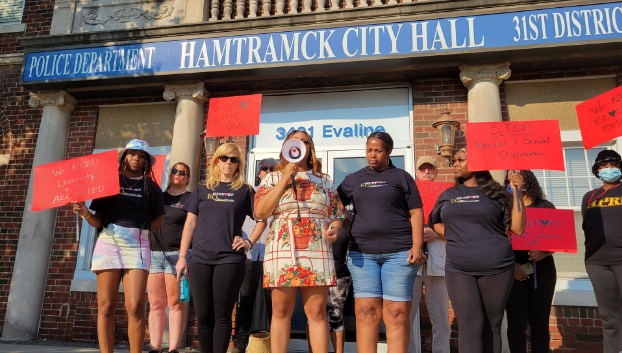 HAMTRAMCK — On Monday, following growing publicity and several protests, members of the Zoning Board of Appeals convened and unanimously voted to approve a use variance zoning clearance for Esthi Queen Healing Spa to continue operating. This about-face decision overturned the ZBA’s original vote to deny the zoning request made following a controversial meeting held on July 14. The protesters were instructed to wear all black and wielded signs that stated, “We Need Black Businesses” and “Stop Racial and Sexual Discrimination.”

The Arab American News covered the events of the ZBA meeting on July 14, in which the board voted 4-3 to deny the request after a heated discussion that brought forth emphatic suspicions of racism at play due to questionable comments made by members of the public and strong opposition by several members of the board.

Despite pressure to accept this decision by the city, the owner of the spa, Tiara Boyd, took action to fight for her business. On July 23, she joined local podcast MotivateMe313 for a live-streamed “Barbershop Talk” segment panel at Randy’s Barbershop, one of the city’s few Black-owned businesses.

The conversation was joined by Nasr Hussain, a ZBA board member who gained pushback after being one of the more vocal opponents of the variance and who was accused of discrimination. Mayor Karen Majewski also came on to vocalize her support of the spa and answer questions regarding zoning procedure and clarify her role in the matter.

The discussion was intended to address the current state of the relationship between Black communities and the city of Hamtramck.

Boyd was joined by dozens of supporters, including local salon owners, activists and community members. The protesters were instructed to wear all black and wielded signs that stated, “We Need Black Businesses” and “Stop Racial and Sexual Discrimination.”

Gathered around her supporters, Boyd told The Arab American News she planned to keep fighting for the right of her business to stay open.

Reflecting on the “Barbershop Talk”, Boyd said what started out as an opportunity to have an open discussion with other city officials on her situation following the use variance denial, “led to personal issues between them (Hussain and Majewski) that had nothing to do with what was going on at hand. So I feel like this city is clearly blindsided somewhat about the facts of what is really going on at the moment.” The first protest at City Hall witnessed more than 50 demonstrators expressing their support for the spa and raising awareness about discrimination of woman-run Black-owned business, a sentiment that many vocalized is dual evidence of anti-Black racism and misogyny, otherwise known as “misogynoir.”

Boyd stood in front of the demonstrators circling the steps to City Hall, addressing the crowd over a megaphone.

“My place used to be a bar, but after opening a spa, the community said that they fear for their children; they don’t know the type of people I’m going to bring to this community,” she said. “They’re scared for their lives; they put cameras up. And I was denied based on the (public) comments alone. So what I’m standing for is not just to get this variance, but to stand up because a black business is needed in this community. Hamtramck is supposed to be diversified.”

A local activist, Rev. Teferi Brent, was among a line up of speakers at the protest.

“I stand here with Black women because it’s about time that Blacks step up and start supporting Black women. Black women have supported Black men behind every significant movement in this country.”

Rev. Brent advocated for others from the Black community to “take ownership of this movement” and to “refuse to accept being oppressed, suppressed and disrespected.”

“There is no reason that the zoning board, full of Arab men and White people, and all the White folks voted for her (Boyd) and all the Arab men voted against her. You can’t tell me that ain’t racism and misogyny. I’m not accepting it. I’m ready for you to step up!” They probably said things that could be misconstrued as racist. And so my concern is that now there’s going to be Islamophobia that is going to start flaring up in a city like before. — Bill Meyer, resident and One Hamtramck organizer

The protest wrapped up in a vocal commitment echoed by the crowd to stay dedicated to the fight for EQ Healing Spa, with promises to continue the protests. The next protest in front of Tekla Vintage took place a few days later on Friday, with many of the same participants calling for boycotts of the mayor’s business until justice was served.

On July 30, the ZBA posted a notice stating that board Chair Thomas Habitz called for a special meeting to be held immediately on the evening of Aug. 2, the subject under review was the “reconsideration of the ZBA’s action on July 14, 2021 of the request for a use variance for a spa in the residential district.”

The notice also stated the meeting was requested by Malek Hussein, one of the three ZBA members of the prevailing “no” vote, including Nasr Hussain and Adam Alharbi.

My decision was not based on skin color or who you are. — Adam Alharbi, ZBA member

Prior to the meeting, Malek Hussein hesitatingly told The Arab American News there was a “misunderstanding” about his involvement in requesting the meeting.

During the Aug. 2 meeting, the city’s attorney, Harry Kalogerakos, oversaw the proceedings and clarified the procedural handlings of a special meeting.

It is important to note, according to ZBA guidelines, a motion to reconsider a previous decision needs to be firstly put forth by a member of the original prevailing party. In this case, it would be one of the three members who voted no, Hussein included.

Public comments were heard from a couple of residents. One comment was contributed by a woman identified as “Abby”, who reiterated past concerns about parking availability around the business as she lives very close to the spa.

Another resident, Bill Meyer, is a longtime activist who spoke about the history of discrimination and inter-community conflicts in the city as more of a complex issue. Meyer is part of One Hamtramck, a community organization that deals with prejudice, racism and Islamophobia.

He attended both protests in support of EQ Healing Spa and told The Arab American News he was also concerned about some of the zoning board members who are Muslim and Yemeni.

“They probably said things that could be misconstrued as racist,” Meyer said. “And so my concern is that now there’s going to be… Islamophobia is going to start flaring up in a city like before. I’ve seen the instances since then, like on Facebook. Yeah, there’s a lot of it. And, you know, pitting people against each other.”

ZBA member Adam Alharbi, who had voted no during the July 14 meeting, addressed these concerns at Monday’s special meeting.

“My decision was not based on skin color or who you are,” Alharbi said. “Especially in Hamtramck, it’s a very diverse city where everybody is welcome to open a business. I don’t think our board has made any previous decisions based on skin color; our decision was based on hardship. It just happens that the three Muslims didn’t find that hardship was proven.”

The meeting took place the night before the primary elections. A candidate for reelection this year, Mayor Majewski attended as part of the virtual audience and was called on to speak. She expressed interest in mainly observing, but did clarify, addressing rumors of favoritism for the business, that she was not part of the ZBA and had no influence in the ruling body’s decision making.

“I supported this business, and still do,”  Majewski said. “I support small businesses within the residential neighborhood.”

Following public comments, evidence of undue hardship was addressed by ZBA members Eric Anderson and Thomas Habitz, who both voted to approve the variance at the last meeting. Habitz referred to the July 6 memo provided by Economic Development Associate Grace Stamper, which detailed the eligibility of the spa at 2456 Florian St. to meet the criteria necessary.

Anderson added that the building property in which the spa is located is “very clearly a commercial building even though it is zoned for residential.” The frustration of the limited use variance, he said, is due to “unique, erroneous zoning from the past.”

The board then brainstormed how to mitigate residential concerns about parking should the variance be accepted.

On record, Alharbi put forth a motion to approve the use variance, adding the condition “to have the business owner try to limit parking to the front and side of the building and off-street parking.” The motion was seconded by Hussein.

The six members of the board present voted via roll call in a unanimous vote to approve the spa’s use variance request, exceeding the two-thirds vote needed to pass.

ZBA member Nasr Hussain, one of the more vocal opponents of the variance, was noticeably absent from the official meeting. During the Facebook live meeting, a resident questioned his absence in the comments section. Hussain immediately replied, “Here, watching this comedy show.”

Boyd held a watch party with friends and supporters, streaming the event live on the spa’s Instagram and celebrating the decision that allows her business to continue operating with zoning clearance.

“I am happy that it’s over,” Boyd told The Arab American News. She said the experience of fighting for her business has been “very life changing.”

Since the ZBA approval, she said she has received an influx of new clients, doubling her current client base. She has been busy re-assembling her bookings and putting out a hiring notice for more employees to help her manage growing capacity of clientele.

Boyd said she wants people who are struggling to continue to persevere and know “there is no limit.”

“I know my grandmother always said, ‘If there is a will, there is a way.’ And that’s so true. There is a difference between people who are hustling and just trying to make money. And yes, business is about money, but that’s not the core of true business art. So, if you’re really dedicated and passionate about your business, nobody can truly stop you.”