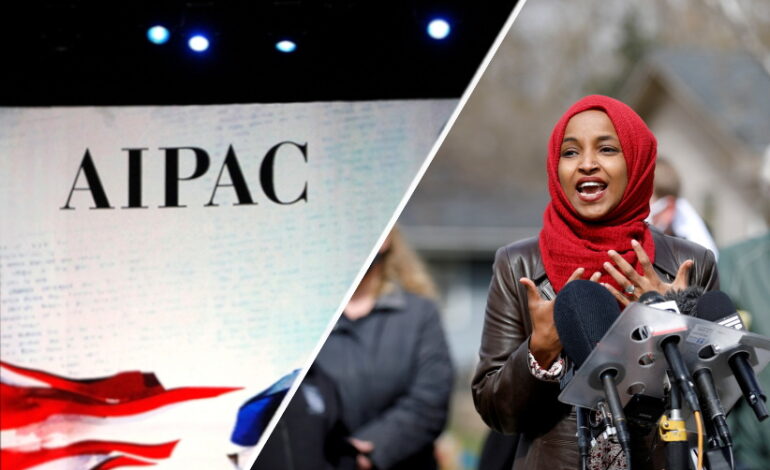 The paid ad by the American Zionist lobby AIPAC refers to comments made by U.S. Rep. Ilhan Omar (D-MN) in June regarding Israel's latest assault on the Gaza Strip. Photos: Reuters

WASHINGTON, D.C. — The American Zionist lobby AIPAC recently took out a paid advertisement on Facebook displaying a darkened image of U.S. Rep. Ilhan Omar (D-MN) with text reading “For Ilhan Omar, there is no difference between America and the Taliban, between Israel and Hamas, between democracies and terrorism.”

The paid ad is in reference to remarks Omar made earlier in the year, following Israel’s weeks-long devastating assault on already-besieged Gaza that killed hundreds of Palestinians and displaced scores.

In June, following a ceasefire in the region, Omar questioned U.S. Secretary of State Antony Blinken about the U.S.’ refusal to recognize the International Criminal Court’s investigations into war crimes committed by Israel in the occupied territories and the 11-day bombardment in Gaza, and by the U.S. in Afghanistan. The ICC had said it was also investigating similar charges for Hamas and the Taliban.

Omar asked Blinken what “mechanisms” towards justice were available to victims of U.S. and Israeli war crimes if the countries refused to accept such investigations.

“We must have the same level of accountability and justice for all victims of crimes against humanity,” she had tweeted. “We have seen unthinkable atrocities committed by the U.S., Hamas, Israel, Afghanistan and the Taliban. I asked @SecBlinken where people are supposed to go for justice.”

After pushback and calls for clarification from both Republicans and Democrats, Omar said she was referring to attempts to “undermine these investigations or deny justice to their victims.”

“Citing an open case against Israel, U.S., Hamas & Taliban in the ICC isn’t comparison or from ‘deeply seated prejudice’,” she tweeted back in June. “You might try to undermine these investigations or deny justice to their victims, but history has taught us that the truth can’t be hidden or silenced forever.”

Omar had also said her fellow Democrats were unfairly singling her out because of inherent anti-Muslim bias and engaging in false tropes that Muslims support terrorism.

Omar had received threats over the comments, one of which she shared on social media. She later issued another clarification, saying the statement was about accountability for specific incidents regarding those ICC cases, not a moral comparison between Hamas and the Taliban and the U.S. and Israel. The latest statement by the powerful Zionist lobby AIPAC was condemned by the Council on American-Islamic Relations (CAIR), the nation’s largest Muslim civil rights and advocacy organization, as “Islamophobic, dishonest and dangerous.”

“AIPAC has once again launched a dishonest and dangerous smear campaign against Congresswoman Ilhan Omar,” CAIR Deputy Executive Director Edward Ahmed Mitchell said in a statement. “AIPAC’s attempt to spread this vile, Islamophobic language to Facebook users could incite threats of violence against Rep. Omar and other American Muslim leaders.

AIPAC has attacked Omar for other comments in the past, specifically one where she referred to the enduring influence of Zionist lobbying and campaign money in the U.S. government, and how real criticism of Israel’s illegal apartheid policies in Palestine was non-existent in the American political mainstream due to that influence.