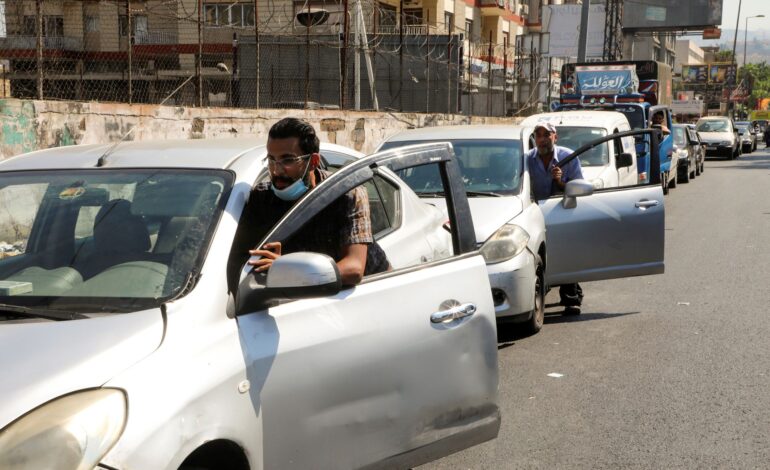 People push their cars due to a lack of fuel, near a gas station in Dora, Lebanon, Aug. 17. Photo: Mohamed Azakir/Reuters

A letter co-led by U.S. Reps. Rashida Tlaib (D-Detroit) and Debbie Dingell (D-Dearborn) is urging the Biden administration to allow Lebanese nationals an extension of their stay in the U.S. during Lebanon’s dire economic crisis, by designating Lebanon for Temporary Protected Status, or TPS.

Support for the letter is growing in the House, with 66 cosigners as of Thursday. It is expected to be submitted next week. The appeal has the influential co-backing of House Judiciary Committee Chair Jarrold Nadler (D-NY) as well as the chair of the subcommittee on immigration for the Judiciary Committee, Zoe Lofgren (D-CA).

It asks the U.S. Department of Homeland Security Secretary Alejandro Mayorkas to allow the TPS designation for Lebanon or, at a minimum, allowing Deferred Enforced Departure (DED) for Lebanese nationals.

TPS allows individuals reprieve from immediate removal for nationals of countries that have been designated as unsafe for return due to “ongoing armed conflict”, “environmental disaster” or “extraordinary and temporary conditions in the foreign state that prevent aliens who are nationals of the state from returning to the state in safety.”

Lebanon is in the midst of ongoing and intense economic crises, with routine power outages and fuel shortages threatening the country’s already vulnerable infrastructure. Lebanese have suffered through lack of access to medical care, potable water, food, electricity and fuel. The country has not had a fully formed government in over a year, crippling the ability of authorities to address the crises. The letter cites U.N. estimates that show 78 percent of the Lebanese population (3 million people) were living in poverty as of March, with an estimated 36 percent (1.38 million people) experiencing extreme poverty. Since October 2019, the Lebanese pound has lost 90 percent of its value, resulting in a year-on-year inflation rate of more than 120 percent from May 2020 to May 2021.

The American University of Beirut Medical Center, Beirut’s top hospital and one of the leading medical centers in the region, has issued a warning that hundreds of patients will die if they fail to secure enough fuel to keep their generators running.

“…It is clear that the country is not in a position to safely accept the return of its citizens at this time,” the letter read. “Standing with the Lebanese people in their time of need is both morally right and in line with our national interests.”

More needs to be done

TPS can allow someone here on a non-immigrant visa… to have stability and not have to worry about visas expiring, or meeting deadlines and other issues. – U.S. Rep. Rashida Tlaib (D-Detroit)

Tlaib and Dingell told The Arab American News on Thursday that though the Biden administrations’ efforts, like the recent $98 million in aid to Lebanon, are commendable, more needs to be done to protect Lebanese nationals in the U.S. at this time. Both represent districts with high concentrations of Lebanese Americans, including those visiting family members or on vocational visas.

The U.S. and Iran have also recently aided the country with electricity and fuel provisions, but Lebanon’s economic trouble run deep.

The call for TPS for Lebanon has been an ongoing effort by both Congresswomen.

“What TPS can do is allow someone here on a non-immigrant visa, for example a student, a visitor or on a business visa, someone on a non-permanent residency, to have stability and not have to worry about visas expiring, or meeting deadlines and other issues,” said Tlaib, who has a background in immigration law.

Tlaib said that an advantage to having a temporary stay is that sometime that status lasts for a year and gives the individual the opportunity to work while they are under TPS.

People don’t understand what a crisis it is. Lebanese do not have electricity, they don’t have access to medicine, clean water, they don’t have food and are starving. — U.S. Rep. Debbie Dingell (D-Dearborn) Dingell had been leading the effort to designate Lebanon for the status since last year’s deadly Beirut explosion.

“The community had come to me last year about the rapidly deteriorating situation in Lebanon,” Dingell said. “We have the largest Lebanese community in the country; there are family members visiting who are facing a real nightmare back home.”

The World Bank is now rating the crisis as one of the top three of the most severe crises in the world. But Dingell said many are simply not aware of the severity of the situation.

“People don’t understand what a crisis it is,” Dingell said. “Lebanese do not have electricity, they don’t have access to medicine, clean water, they don’t have food and are starving. If we get TPS or DED status, Lebanese nationals will be protected from deportation. The country is not safe to return to.”

Last week, Dingell, as co-chair of the U.S.-Lebanon Friendship Caucus, asked the administration for support for Lebanon, especially for key institutions, including higher education institutions and the health system, which face potential collapse.

Speaking anonymously to The Arab American News, a Lebanese national who has been visiting his family in Dearborn Heights on a temporary visa spoke of the anxieties he and his family are experiencing as his stay expires in mid-September.

“My family lives here, many of them have permanent residencies and citizenships,” he said. “The problems in Lebanon are not getting any better. There’s no gas, water, electricity, there’s no safety. I’m so scared to travel back.”

The Lebanese national, who works as an administrative assistant in Lebanon, said his family in Dearborn Heights and his loved ones back home do not want him to have to travel back during such a dire crisis in the country.

”My friends and family back home tell me of their difficulties and urge that this is not the time to return,” he said. “I have traveled to the U.S. from Lebanon many times before, I have never been in this situation where returning is not a good option.”