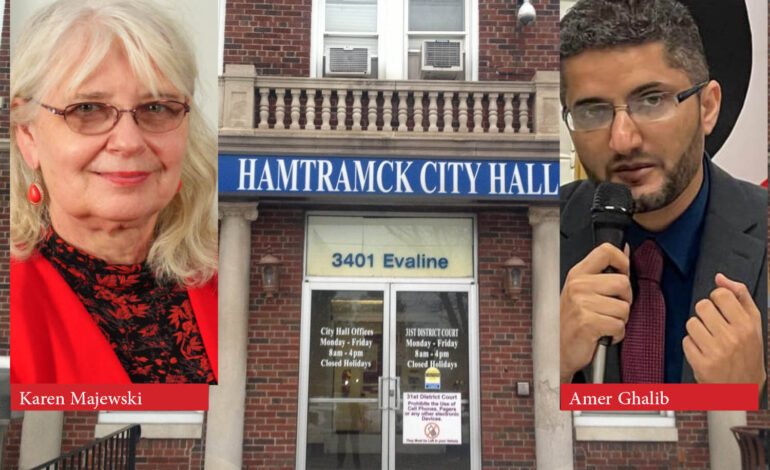 In the Hamtramck mayoral race, The Arab American News decides not to endorse

Endorsing candidates for important offices is a major responsibility for local organizations and newspapers.

For an ethnic newspaper, the voice of the community we advocate for has to be taken into consideration, as should the issues that affect it the most. But decisions on endorsements cannot simply come about with a superficial look at candidates, or with an allegiance to a certain political or ethnic identity.

In the likely historic upcoming Hamtramck mayoral election, we recognize that both incumbent Karen Majewski and her opponent, Amer Ghalib, have put passion for public service behind their campaigns. But in this case, there are factors relating to both candidates that have led us to not see a viable candidate for endorsement in that particular race.

Majewski certainly has many years of dedicated service and a track record of reaching out to communities in one of the most diverse cities in the state, and this paper has previously endorsed her because of her commitment to this diversity. But in recent years, we feel that she has alienated the demands of a large section of the city’s population, especially at a time when certain issues cause a deep and abiding wedge.

No matter where you stand on marijuana, it has been known for some time that the Hamtramck Muslim community has not had an appetite for marijuana businesses. It is true that it was the responsibility of the then Muslim-majority Council to definitively opt out of marijuana, which they failed to do in time. But Majewski could have done more to reach out to concerned citizens about the impending wave of marijuana businesses waiting around the corner, to let them know that their input was valuable.

Further, during bitter Council debates around the issue, when Muslim Council members were being unfairly attacked, the city’s mayor could have kept order and could have defended the population against blatant xenophobia in public discussions over marijuana.

Majewski certainly has concrete ideas about the city’s future, and her experience gives her a wealth of knowledge, but invariably, that inaction has put her at odds with much of the city’s immigrant population.

Ghalib emerged as the front-runner in this last primary as a relatively unknown figure in Hamtramck politics. While we congratulate him on his success, and are happy to see an Arab American on this prominent stage, Ghalib has not made clear what his actual proposals are for any of the pressing economic issues facing Hamtramck.

Media questions to candidates should, in part, illuminate how well a candidate understands the ins and outs of a community’s politics, its financial history, its economic future and more.

In his answers to our questionnaire regarding the city’s difficulties paying its contractual retirement obligations, we asked Ghalib to be as specific as possible to help us understand what he knows about that particular issue and what actual options the city and its residents have.

What he referred to instead were some vague notions about looking to state authorities about solutions and increasing tax revenue from businesses. Apparently, Ghalib’s suggestions would be to offset residential taxes that could have been used to pay for retirement obligations and instead rely on tax revenue from businesses. But it is one thing to promise lowering tax burdens and another to tell us, in actual terms, and with reference to local and state revenue mechanisms, how you plan to do so.

Further, what will he do when the business community lobbies and threatens to move because of unfair taxation? Promise to lower taxes on them as well? And how can he promise that the city will collect enough of that business revenue in time to pay its retirement bill, which is due now and if unpaid will be levied by a court order from residents?

No matter how our readers choose to vote, we can all hope that we can hold our candidates and elected officials to higher standards of accountability and transparency, going forward.

We ask Hamtramck’s voters to vote on November 2 for the candidate they believe that will lead their city forward. Unfortunately, we are unable to make any recommendation for this race in this election.