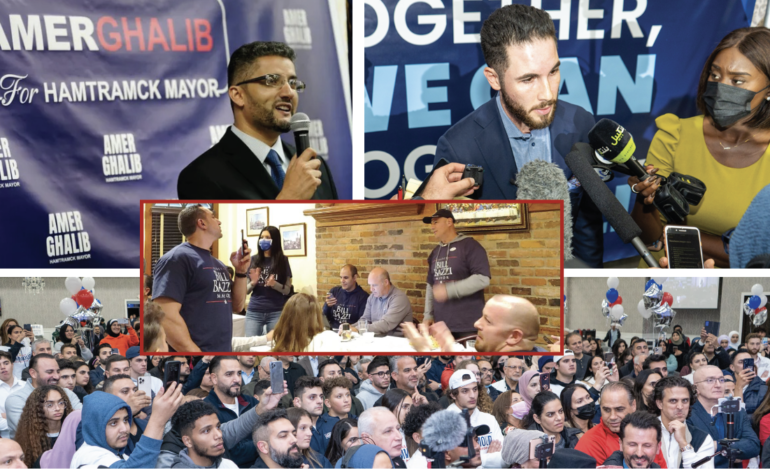 This week, headlines regarding Tuesday’s election across local, national and international media included some version of the word “historic.”

Not surprising when one takes into consideration that three Arab American candidates in some of the state’s densest cities enjoyed landslide victories for mayoral races: Amer Ghalib in Hamtramck, Bill Bazzi in Dearborn Heights and Abdullah Hammoud in Dearborn.

But these victories have not appeared in a vacuum; indeed, they carry with them the weight of a long history of struggle for equality, respect and political representation.

The 31-year-old Hammoud, having already proven his political and representative acumen in the State House, was poised to defeat his opponent, Gary Woronchak, after a successful primary.

But one cannot recognize what a momentous occasion his victory marks without remembering the travails against racism and xenophobia felt by the Arab community in Dearborn, neighboring cities and across the nation.

In 1985, a then-31-year-old Michael Guido, trailing behind in his mayoral run, played into the city’s worst tendencies and put out a campaign brochure entitled “Let’s talk about… the ‘Arab Problem'”, promising a “vigorous enforcement… of nuisance codes”, which his police department happily obliged. That malicious ad won him the position and the Arab American community was forced into the shadows, apprehensive about asserting its political will and careful not to ruffle feathers.

In 2001, a brave young Arab American candidate, ironically with the name Abed Hammoud, tried to challenge that infamous tabloid and run against a formidable then-Mayor Guido. Unfortunately the primary happened to be on September 11, 2001. With all the tragedy and fear that surrounded the tragic event, Hammoud was able to conduct an impressive campaign and come in second place ahead of former Dearborn Police Chief Ron Deizel.

And things have not changed so drastically. One can still hear the dog whistle in Facebook comments about this week’s election, about Hammoud’s qualifications, Ghalib’s professional credentials, doubts about Bazzi’s military service…

Regardless, since those days, a slate of qualified Arab American candidates with real campaigning skills and a passion for public service has emerged; and for many local Arab Americans this marks a chance to dream bigger. One Dearborn resident told us that a victory for Arab American candidates like Hammoud affirms the notion that in this country, if you work hard for and work in the best interests of everyone, “especially the most vulnerable amongst us”, you, too, can win an election despite having an ethnic-sounding name.

Long-time Yemeni American organizer and advocate Kalid Shajra said that Tuesday night was historic not only for Arab Americans, but for many ethnicities.

“It’s a testimony that the Arab American Dream lives on and that each community can be a part of the melting pot of the U.S., generation after generation, and that eventually each will have an opportunity to serve.”

A testimony to the ripple effects of a seemingly local election can be seen in Ghalib’s win and what that means for the vibrant Yemeni diaspora across the country.

Ghalib had visited the Yemeni community in the Bay Area shortly before the election, as is traditional for many Yemeni candidates in Michigan who are connected with the Yemeni diaspora in California and New York.

“I called (Ghalib) the day of his victory and we discussed how this would open more opportunities for Arab, Yemeni and Muslim Americans,” said Yemeni American Association of the Bay Area’s Dhaifallah M. Dhaifallah. “He was invited by us, and after asking him questions and discussing his political platform, we felt that he would represent all communities in Hamtramck well.”

Dhaifallah said that with enough election participation in his own community out west, the country will also witness such names in influential positions. Historians know of Yemeni immigrants’ essential place in the history of the Bay Area area and surrounding region, dating back to mid-1900s. Like the Yemenis of Metro Detroit, the community out west is an exemplary ethnic community, with numerous stories of their own successes, like attaining much needed resources to immigrants fleeing disastrous interventions back home.

And for Yemeni Americans in Michigan, Ghalib’s victory is a culmination and testimony of hard work and determination to represent itself and its diverse interests.

Though Arab Americans become increasingly involved in civic activities, these representative positions are truly a leap, given that just a decade ago, surveillance and suspicion were a hallmark of the broader American community’s relationship with ours. No matter what political spectrum one falls in, credit should also be given to voter organizations on the ground.

Organizations like Emgage PAC, which endorsed Hammoud and conducted large-scale voter mobilization efforts to ensure his victory. The organization secured more than 12,000 pledges from Muslim Americans to vote for Hammoud, knocked on 23,000 doors, sent 152,000 texts, sent 5,000 mailers and made 14,000 calls in support of his candidacy.

“As the first Muslim mayor of Dearborn, we are confident that he will continue to be a tough advocate for Dearborn’s most marginalized citizens,” said Nada Al Hanooti, executive director of Emgage PAC’s Michigan chapter.