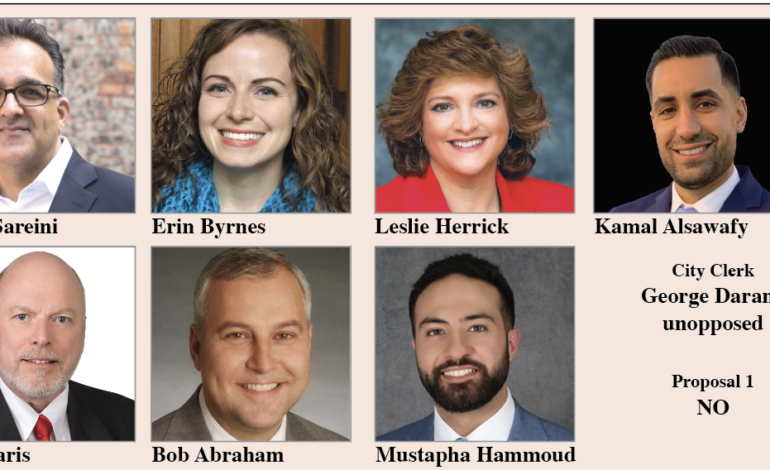 DEARBORN — As a historic election comes to an end, the city will be welcoming three new faces to the City Council and nine Charter Commissioners.

All seven City Council seats were up for grabs, with four incumbents — Mike Sareini, Erin Byrnes, Leslie Herrick and Robert Abraham — running for re-election and seven others also running. Sareini, who has held a seat on the City Council for the last seven years, had the highest number of votes with 13,583, making him the new Council president come January. He will replace Council President Susan Dabaja as she had run for mayor and was eliminated in the primaries.

Byrnes, who was first elected in 2018, had the second highest number of votes with 10,602, making her the new Council president pro-tem, Sareini’s current role.

Herrick, who was running for her second term, had the third highest number of votes with 10,421, while Abraham had 8,883 votes.

Clerk George Darany ran unopposed and received 15,724 votes or 98.7 percent of the votes, with a write-in candidate receiving the other 1.3 percent.

With 22 names on the ballot running for the Charter Commission, voters had to select nine candidates to form the commission that will revise the city charter for the first time since 2007. The 55-page charter is divided into 20 chapters, which address such things as the city’s boundaries and political divisions, general municipal powers, the powers of the Council, the executive department (including the mayor, clerk and treasurer), elections, finances and taxes, and public improvements, among other topics.

Section 19.5, “Amendments and revision”, states that the 2021 primary election and every 12 years afterwards, “and at such times as may be provided by law”, voters will decide whether to revise the charter, meaning that residents will not be able to make changes to the charter for another 12 years.

Voters were also asked to approve a supplemental, temporary tax to fund city operations, including critical services such as police and fire protection.

Approval would have cost the average homeowner $167 per year, a $46 per year deduction from what they were already paying.

Without the approval, more than $16 million in city revenue is expected to be lost, leading to a significant reduction of resources for Dearborn programs and services, including funds available for public safety, which is a 12 percent across-the-board-cut.