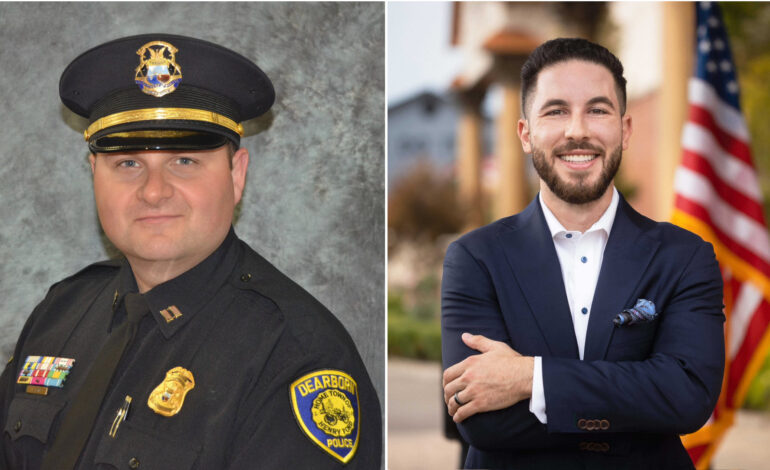 Shahin has served in that department for some 24 years, serving as executive commander for the last three. He will succeed current Chief Ronald Haddad, who was appointed by Mayor Jack O’Reilly Jr. and has served as Dearborn police chief since December 2008.

“Commander Shahin is the senior most executive commander with a strong track record and good rapport within the department,” Hammoud said. “He’s committed to building a trusting relationship with residents and delivering equitable policing in a way to best meet today’s demands in community policing. I am confident he will deliver the transparency and accountability residents expect while positioning our police officers for success.”

Shahin will succeed current Chief Ronald Haddad, who was appointed by Mayor Jack O’Reilly Jr. and has served as Dearborn police chief since December 2008.

Shahin has held several positions since joining the department in 1998. He applied to be police chief through DearbornTransition.com and was vetted by the mayor-elect’s transition team interview process.

“We’ve made progress in the department over the past several years, but there’s a lot of work to do to strengthen our relationship with residents and incorporate the latest policing practices to best serve the city,” Shahin said. “I look forward to working with the new mayor to address the concerns of residents in a meaningful way and tackle key issues such as reckless driving and mental health for residents and first responders.

Shahin has a bachelor’s degree in political science and master’s degree in homeland security and emergency management from Eastern Michigan (EMU). He also graduated from the EMU School of Police Staff and Command’s Executive Leadership Program.

Chief Haddad’s career in law enforcement spans nearly 50 years and began with the Detroit Police Department in 1973. He retired from that department as deputy chief of the city’s northwestern district in January 2007.

“Chief Haddad has served the city of Dearborn honorably for more than a decade, working hard to increase public safety and keep our neighborhoods and residents safe,” Hammoud said. “The city is thankful for his commitment to the job and his years of public service.”

Under my leadership, the department will address critical issues such as road safety, mental health response, neighborhood policing and others. – Issa Shahin, Dearborn’s appointed-chief of police

In his application letter, obtained by The Arab American News, Shahin said the Police Department can embrace needed police reforms while removing criminals from the streets and that “the concepts are not mutually exclusive.”

“Providing equitable policing to all communities and concurrently remaining tough on crime is wholly achievable,” Shahin wrote. “Under my leadership, the department will address critical issues such as road safety, mental health response, neighborhood policing and others. All stakeholders involved in the process will reach decisions collaboratively.”

Shahin takes over in the top police position as residents continue to be rattled by dangerous traffic incidents and overall safety. Much like the rest of the country, many Dearborn residents are also echoing concerns of communities of color, who have seen high-profile incidents of brutality and misconduct, sparking nationwide protests last year. Many have asked for allocating resources to strengthen social services and mental health systems as an alternative to policing to tackle community issues.

Hammoud, Shahin, other appointees and a new City Council begin serving the city in January.