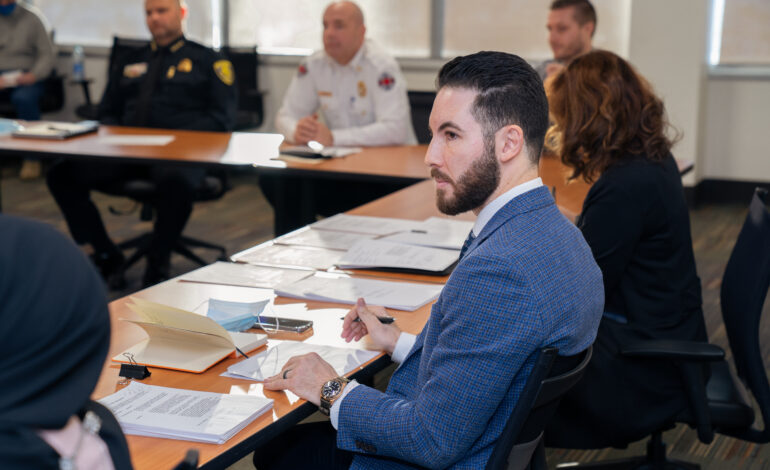 DEARBORN — Residents of Dearborn now have a deeper view of the city’s much-anticipated new administration, with the city’s new mayor announcing the names of his executive team.

Mayor Hammoud announced the executive team on Wednesday, including directors of key municipal departments and offices. The new leadership team will helm a reorganized office structure, optimized for efficiency, collaboration and greater transparency, the administration has said.

The City Hall changes and new hires were approved by the Dearborn City Council Monday evening. The appointees were sworn in at the Dearborn Administrative Center on Tuesday, when Hammoud and City Clerk George Darany conducted a swearing in ceremony for new city officials.

“In preparing for our administration, my top priority was to bring in the most competent, qualified and dedicated leaders to serve our city with integrity,” Hammoud said. “With these hires, I’m confident we’ve done that. They bring not only vast experience, but the innovative mindset needed to deliver superior public service to our residents in 2022 and beyond.

“Diversity is about recognizing that there is expertise in every corner of our city and gaining insights we otherwise might not have,” he added. “By bringing in this historically diverse team, we draw on our collective talents to solve our collective problems.”

More appointments will be announced in the coming weeks as interviews continue.

The group of appointees includes several historic firsts and is likely the most diverse in the city’s history. Here’s who’s on Hammoud’s executive team as of now, with bios provided by the mayor’s office:

Zaineb Hussein, chief of staff: Hussein formerly served as deputy chief of staff for the Michigan secretary of state, where she developed actionable recommendations to improve efficiency, expand partnerships, protect election integrity and enhance voter access. In that role, she also developed strategies to adapt to the challenges of the COVID-19 pandemic, including the Voting Matters Initiative. Previously, Hussein served as deputy director of external affairs for Wayne County, where she launched initiatives to enhance diversity, equity and inclusion and campaigns welcoming new Americans on behalf of Wayne County’s 1.7 million residents. In the lead-up to the 2020 Census, she led strategic planning for the county and was appointed by Governor Whitmer to the statewide Complete Count Committee. Hussein began her public service in the Michigan Department of Human Services (DHS), where she chaired the Equal Opportunity Diversity and Inclusion Advisory Committee. She holds a bachelor’s degree in history and political science from the University of Michigan and a master’s degree in counseling from Spring Arbor University. Upon being sworn in, she became the first Arab American Muslim woman to serve as a Dearborn mayor’s chief of staff.

Mansour Sharha, director of Technology and Innovation: Sharha is an innovative technology leader with 20 years of IT experience. He will lead the Department of Technology and Innovation, formerly the Department of Information Systems. Mayor Hammoud announced a new mandate in the department, reflected in the updated name, to go beyond traditional IT functions and pursue modern, innovative strategies to enhance the city’s technological reach and impact. Sharha has led projects that include IT infrastructure and service delivery for major automotive clients, database and applications virtualizations, ERP migration, Agile hosting environments, data center transformation, network development and security & Cloud infrastructure transformation. He holds a master’s degree in telecommunications & networking and is completing his PhD in information technology. He holds several IT industry certifications, including PMP, MCP, MCSA, MCSE, CCNA, CCNP, CCSP, Network+ and A+. He brings diverse and cross-sector IT industry experience, including the Alleghany County Health Department in Pittsburgh, PA, DaimlerChrysler, Ford Motor Company, Dell Services and NTT Data Services. Mansour is the first Yemeni American to serve as an executive appointee of the mayor’s office. Prior to that, he served as a captain in the Investigative and Patrol Division and as a lieutenant in Critical Incident and Community Support. Between 2009 and 2013, he served as a sergeant in the Tactical Patrol Unit and as an ATF task force officer. He earned a Bachelor of Science degree cum laude in political science and government and a master’s degree in homeland security and emergency management, both from Eastern Michigan University. He is also a graduate of EMU’s Police Staff & Command Executive Program. He looks forward to embracing a culture of transparency and accountability as leader of one of the largest police departments in Michigan. Prior to that,  Baydoun was appointed as a government innovation fellow at the Harvard Kennedy School of Government, using his fellowship support to work on statewide juvenile justice reform in Illinois. He also served on former President Clinton’s briefing team at the Clinton Foundation, where he advised Clinton and the Foundation’s senior leadership team on a wide range of international policy issues. He holds a Master of Public Policy from the University of Michigan Ford School, where he was the inaugural Gerald R. Ford Presidential Fellow, and a bachelor’s degree in history from the University of Michigan. In his six-year tenure at the city of Dearborn, Hawkins has held the positions of building inspector, senior building inspector and most recently was the director of the Property Maintenance and Development Services. Prior to working for the city, he worked as a union bricklayer and foreman for several construction companies. He then launched and operated his own masonry contracting business until being hired by the city. He is a past vice president for the Nowlin PTA and serves on the Board of Directors for the Dearborn Goodfellows. He is a lifelong Dearborn resident who attended Duvall Elementary, O.L. Smith Middle School and Edsel Ford High School. He is currently attending Henry Ford College and enjoys spending time with family and restoring classic cars.

Nicole Hefty, director of Philanthropy and Grants: (Photo not provided) Hefty is an enterprising nonprofit professional with a passion for the written word. She will lead a new Office of Philanthropy and Grants, housed under the Finance and Treasury Department. The office will be responsible for streamlining a largely disconnected grant writing and collection process throughout the city, identifying potential grant opportunities and maximizing grant dollars and return on investment for Dearborn.

She has broad experience in research and social services, from serving survivors of domestic violence to performing health systems research and providing strategic operations management for a university science department. She has a Bachelor of Arts in writing as well as a Master of Public Administration from Western Michigan University and is a first-generation college student. She believes in paying forward the knowledge and skills she has acquired and teaches a course at her alma mater to prepare students for public service.

Michael Kennedy, director of Finance and Treasury: Kennedy brings more than 20 years of employee management experience, diverse financial skills and detailed knowledge of the operational and accounting components of business. During the past seven years at the city of Dearborn, he has held several managerial roles in the Finance Department, where he has helped the city achieve repeated unmodified auditor opinion reports on the Annual Comprehensive Financial Report (ACFR). He received a Bachelor of Business Administration degree with an accounting major from Western Michigan University and has deep knowledge of both Generally Accepted Accounting Principles (GAAP) and the Governmental Accounting Standards Board (GASB).

Joseph Murray, fire chief: Murray has served as Dearborn fire chief since 2012, overseeing all administration and operations of the Dearborn Fire Department, including 143 professional firefighters working out of five stations. Under his leadership, Dearborn Fire has an average response time of six minutes across 28 square miles. In 2016, Dearborn Fire earned a class two rating from the ISO, placing the Department in the top 2 percent of all fire departments in the United States in terms of efficacy at putting out fires. Murray has also secured roughly $14 million dollars in grants for the Department and city, modeling excellence in fiscal management and strategy. Last year, he was appointed to the statewide Protect Michigan Commission, an advisory group to Governor Whitmer created to educate the public on the safety and efficacy of the COVID-19 vaccine.

Alia Phillips, director of Community Relations: Alia Phillips is a leading community organizer and strategist who has supported local, state and national efforts to boost civic engagement and participation. As leader of the newly created Office of Community Relations, Phillips will oversee a community liaison model that gives residents faster and more accessible means of voicing concerns and participating in local governance. She previously served as the Bernie 2020 Michigan field director, overseeing all community outreach in the state for a leading national campaign, including 15 staff and roughly 1,000 volunteers. Prior to that, she served as deputy campaign manager for the Dana Nessel for Michigan Attorney General campaign and political director for the Abdul for Michigan gubernatorial campaign. In both roles, she was responsible for building strong ties with leading community groups and policy stakeholders across the state. Phillips was born and raised in Ann Arbor and holds a bachelor’s degree in political science and anthropology from McGill University in Montreal, Canada.

Jeremy J. Romer, corporation counsel and chief labor negotiator: Romer currently serves as corporation counsel for the city of Dearborn and acts as attorney and counsel for the City Council, the mayor, and all city departments on legal matters related to their official duties. He also serves as chief labor negotiator for the city of Dearborn and oversees the city’s collective bargaining negotiations and employment and labor disputes. He has spent his entire legal career in municipal law with the city of Dearborn, having previously served as deputy corporation counsel and chief labor negotiator. He has handled litigation and appeals in state and federal courts as well as administrative proceedings, with substantial experience handling matters in the Michigan Tax Tribunal and Michigan Employment Relations Commission. He also has significant experience working with municipal boards and commissions, defending their actions and designing rules of procedure to guide their activities and compliance with the Open Meetings Act. Romer holds both an LLM in taxation and JD from the Thomas M. Cooley Law School.