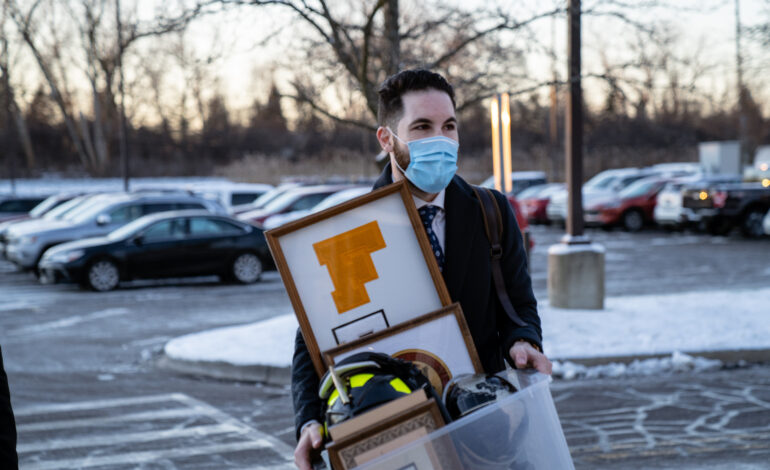 Hammoud is the first Arab American mayor of the large and historic city, home to the Ford Motor Company headquarters, with a population of close to 110,000.

His election made international news and he is one of three Arab American mayors in Metro Detroit. Amer Ghalib, the first Arab American mayor of Hamtramck, also won in the November election and was inaugurated along with the city’s first all-Muslim City Council on Sunday.

Dearborn Heights Mayor Bill Bazzi has been serving the city since last year, taking over for former Mayor Dan Paletko who tragically passed away from COVID-19 complications in late 2020. Bazzi also won a full term in last November’s elections. On Monday Hammoud met with staff at the DAC, toured the building and offices and was accompanied by newly appointed Chief of Staff Zeinab Hussein and IT Director Mansour Sharha. Hammoud’s transition team created a hiring portal soon after his election victory to scout qualified candidates. He has promised an administration of qualified individuals who also happen to be diverse and reflect the city’s population.

The new mayor thanked existing and outgoing staff, some of whom served their last day on Monday. He also spoke with city, police and fire officials, including new Dearborn Police Chief Issa Shahin.

He thanked those who attended their last meeting at the DAC for their years of service to the city.

“Without you at the helm of this ship, we wouldn’t be where we are today,” Hammoud said. “I really wanted to acknowledge your service and thank you for the time you’ve spent with the city (and) the sacrifices you’ve made, because public service is not easy.” Later, during a Facebook Live address, he spoke about his first day and gave an update on more appointments. The Dearborn City Council was expected to approve salaries for Hammoud’s appointments Monday evening. He also said he hoped to use social media as platform to connect with residents.

Longtime former Dearborn Mayor Jack O’Reilly decided not to run for reelection last year. O’Reilly had a distinguished career with the city as Council president for 17 years and mayor for 15.

Hammoud, a Dearborn native and three-time University of Michigan graduate, previously represented Dearborn and the 15th District in the State House.

On Monday, Governor Whitmer called for a special primary election on March 1 and general election on May 3 to fill the vacancy left by Hammoud.