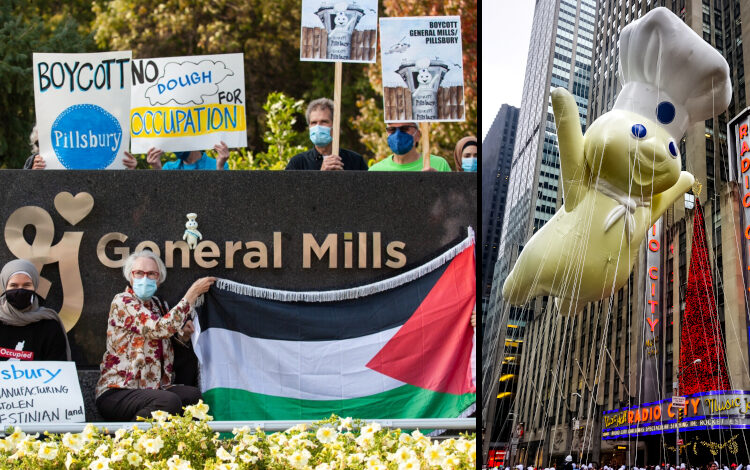 After two years of calls by human rights campaigners, General Mills, the company that produces the popular Pillsbury brand of products, has divested its Israeli business.

The calls came from a diverse set of organizations and interests, including the Quaker organization American Friends Service Committee (AFSC), which promotes “a world free of violence, inequality and oppression”, Jewish Voice for Peace, American Muslims for Palestine and other groups.

The Pillsbury family itself joined the chorus of voices, calling for a boycott of the brand it started more than a century ago. The Pillsbury brand was started by the Pillsbury Company 150 years ago in the U.S. and was later sold to General Mills.

Charlie Pillsbury wrote an op-ed in Minnesota’s Star Tribune on behalf of members of his family last year entitled “Why we must boycott Pillsbury.”

“As long as General Mills continues to profit from the dispossession and suffering of the Palestinian people, we will not buy any Pillsbury products,” wrote Pillsbury. “We call on General Mills to stop doing business on occupied land.” The Pillsbury factory in the Atarot Industrial Zone, an illegal settlement in the West Bank. Photo: Dov Baum/AFSC

In 2020, the United Nations included General Mills in its database of companies doing business in illegal Israeli settlements in the occupied Palestinian territory.

After pressure, the company divested its 60 percent stake in its Israeli subsidiary and sold it to Bodan Holdings, which until now only held the other 40 percent.

After this divestment, General Mills’ operations in Israel are fully owned by Bodan Holdings, whose owners are Israeli business people Danny Nagel and Boaz Raam.

But the company chose to avoid referencing the political and human rights issues surrounding the campaign, choosing instead to justify the divestment as “strategic” business choices, “about where to prioritize” resources to “drive superior returns.”

But according to the AFSC, which has background knowledge on the matter, the pressure from numerous rights groups and business interests pushed the company to make the decision.

We congratulate General Mills on this decision and hope this is the first step in cutting all its ties to Israeli apartheid and toward respecting universal human rights. — Noam Perry, AFSC

“General Mills’ divestment shows that public pressure works even on the largest of corporations,” said Noam Perry of the AFSC’s Economic Activism program. “With this move, General Mills is joining many other American and European companies that have divested from Israel’s illegal occupation, including Microsoft and Unilever just in the last couple of years.

“We call on all companies to divest from Israel’s illegal and brutal occupation of Palestine, and from the apartheid system it is part of. We congratulate General Mills on this decision and hope this is the first step in cutting all its ties to Israeli apartheid and toward respecting universal human rights.”

It is not clear at this time whether the factory will continue making Pillsbury products under a license agreement with General Mills.

The divestment differs from another high profile company’s decision to curb business it conducts in occupied lands.

Though it chose not renew its license with the Israeli company that manufactured its ice cream in Israel, the company said it would stay in Israel though a different arrangement.

Ben & Jerry’s is a subsidiary of food giant Unilever, but has its own independent board of directors.

Long marginalized, the “Right of Return” is once more a Palestinian priority