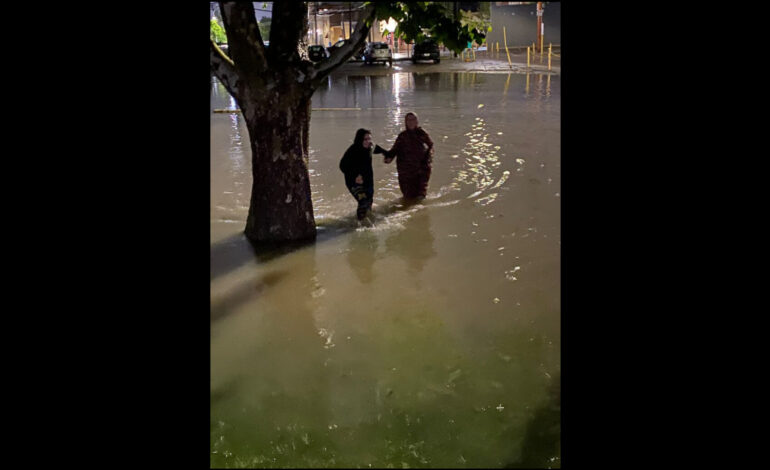 DEARBORN — In the aftermath of severe flooding in Wayne County last weekend, residents are still picking up the pieces in frustration at the slow response and demanding accountability from local and national government officials and agencies.

“We lost just about everything in the basement” — Samia Hamid, a local resident living in the city’s east side

Governor Whitmer declared a state of emergency last Saturday after a flash flood hit communities hard in Southeastern Michigan, overwhelmingly devastating the city of Dearborn. On Wednesday, the Federal Emergency Management Agency (FEMA) granted a request from the governor to officially assess the severity of the damage and response costs.

Late last Friday night, a flash flood precipitated over the city streets, parks and more than 10,000 Dearborn homes. City officials reported the responsibility for the damage lies in failings in the updates of city sewage infrastructure and discharge points, such as the basin viaducts.

“We lost just about everything in the basement,” said Samia Hamid, a local resident living in the city’s east side. She is a single, working mother and is still struggling to clean out her basement, salvage what she can and disinfect the sewage contamination.

“They said itemize everything that you lost and we did,” she said. “That took a lot of time, just for them to deny us. There were a lot of rumors floating that the city got money to fix and reimburse us. They are saying now it’s not true, but really something is going on behind closed doors.”

Hamid said her family lost thousands of dollars worth of furniture and other personal belongings in the floods.

She said residents want to see a better response from officials, “especially the mayor, he has been absent for two years. If he is sick, then he should resign. There is no representation from anybody in this administration.”

State Rep. Abduallah Hammoud (D-Dearborn), a Dearborn mayoral candidate, quickly responded to the flooding calamity faced by his hometown constituents and his own home. He teamed up with City Council hopeful Kamel Alsawafey and a host of volunteers to assist residents with lugging basement furniture, trash pick up and clean up in the city’s east side and Southend.

City Council President Susan Dabaja has called on the city administration to end the trash crisis, as many streets are still littered with hunks of debris awaiting pickup.

Dearborn city government says it’s deploying all resources and on Thursday brought in employees from Taylor, Melvindale and Canton, as well as private contractors, and continues to use city employees who have volunteered to help.

City Council President Pro-tem Mike Sareini spoke with Osama Siblani, publisher of The Arab American News, on the latest development of the sewage pipelines and the urgent need to address community concerns.

Over the last 10 years, flooding in Metro Detroit has been a burgeoning issue during seasonal bouts of unpredictable heavy rainfall, an issue that has repeatedly ravaged the area.

The last major flood was on Aug. 11, 2014. According to weather.gov, “Wayne, Southern Oakland and Macomb counties saw the worst of the flooding as 4 to 6 inches of rain fell over a four hour period” and had similar infrastructure damage and major property loss as the recent flood. Every time there is a major rainfall, we get hit with floods. No one is listening to us, when we told city officials over and over again for years — Samraa “Sam” Luqman, City Council candidate and Southend resident

After years of negotiating a solution, voters approved a bond for a federally mandated Combined Sewer Overflow (CSO) project in 2018. Construction soon began on a second sewer line in Dearborn to eliminate the discharge of untreated rainwater into the Rouge River.

According to the CSO Public Notification Plan, CSO basins will “provide for removal of floatable material and disinfection of wastewater prior to discharge in the Rouge River. The CSO basins are also designed with storage capacity to contain a volume of wastewater from each storm event, including the first flush of the storm. When the storm event subsides, the captured flows are pumped back through the sewer system for treatment at the Great Lakes Water Authority Water Resource Recovering Facility (GLWA WRRF).”

In April, the Dearborn Press and Guide reported the construction plan was four years ahead of schedule and in sight to be completed by November.

Despite this optimism for a better sewage system, the events of last weekend illustrated the ineffectiveness of the current system, with officials telling residents one of the water pumps failed on Friday.

Further, many residents of Dearborn have recently vocalized frustrations with the inequitable placement of the 10 outfall and discharge basin locations in Dearborn, seven on the west side of the city and three on the east side and none in the Southend.

City Council candidate Samraa “Sam” Luqman, a resident of Dearborn’s Southend, echoes the exasperation of her neighbors who felt “neglected and stranded” during the flood.

We are learning that the problem with the combined sewage mandate that was what supposedly prevented the mayor from opening the floodgates to let the water go into the Rouge River. They opened at 6 a.m., by then the damage was done — Sam Luqman

“We are physically isolated,” Luqman said. “There are about four entry points, which are Wyoming, Dix- Miller, Lonyo and Vernor Hwy. And the flooding flooded Lonyo to Dix. It flooded Dix (Ave) and Miller intersection into the viaduct there. It flooded Eagle Pass and Wyoming. So if you were stuck in the Southend during the rain flooding, you could not come in or out.”

Luqman said she attempted to get groceries the next day and most of the businesses were closed due to flooding and no electricity. The Mobil gas station was open and taking cash only, but it did not have any groceries.

She said this is far from the first time the Southend has been flooded. “Every time there is a major rainfall, we get hit with floods. No one is listening to us, when we told city officials over and over again for years.

“But you know, the good thing about the rainfall and what’s happening, is the CSO project is coming out and we’re learning that this wasn’t something that accidentally occurred. We are learning that the problem with the combined sewage mandate was that it supposedly prevented the mayor from opening the floodgates to let the water go into the Rouge River. They opened at 6 a.m., by then the damage was done.”

The Southend neighborhood is located in the industrial district of the city next to the Ford Motor Company River Rouge Plant and AK Steel, a raw material supplier of automotive companies such as General Motors. Residents have been vocal with the local government about the area’s environmental toxicity with air pollution from the factories and trucking causing other health hazards, such as asthma and cancer.

Ziad Abdulmalik is a resident on the east end and is also running for City Council. When speaking with the Arab American News, he said he had been up for 36 hours helping residents in the Southend, where he still has family ties. With his own home still flooded, he said he has helped close to 50 residents who were impacted by the flood with their heating and cooling systems.

“I brought my knowledge from working on these issues and many people called me for help, then more calls,” he said. “They said they were experiencing extreme price gouging. I have been able to save them an estimate of $60,000 in costs when it was actually a quicker fix.”

On Wednesday, Rep. Hammoud put forth a bill in Lansing and helped secure $10 million for municipalities affected by the flooding, as well as resources for further assessment. The bill, SB 27, has passed a vote in the House and awaits a vote in the Senate.

The Arab American News will continue to provide updates on the flooding response.