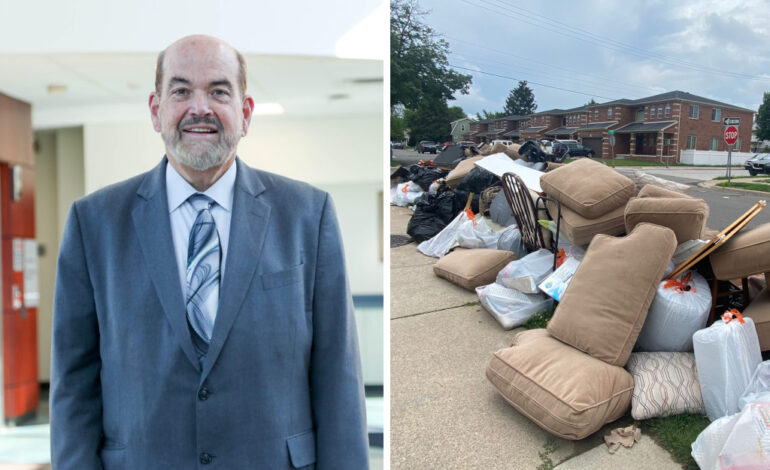 DEARBORN — After alarm from the community about the very public absence of the city’s longtime mayor during a historic flood, Mayor O’Reilly made a statement declaring he has had health issues on Friday.

The statement, attributed to O’Reilly, says health issues have impacted his “ability to attend public engagements” and make public comments, but that he had been fulfilling “administrative responsibilities required in the Dearborn City Charter.”

The mayor was not clear on what the health issues entail, but asked the community to respect his privacy. O’Reilly, who has been mayor since 2007, is not running for re-election this year.

The City Charter spells out the proceedings for removal of city officers in section 6.14. including (a) Absence of the officer from the City for a period of 90 consecutive days. (b) Substantial inability of the officer to perform the functions of office due to physical or mental incapacity.
The Charter gave the City Council the authority to act upon this matter and to “hold public hearing to investigate the matter. A majority of the members of the Council thereafter may vote to declare such office vacant.”

The mayor’s statement comes after a recent post by The Arab American News and a WXYZ report wondered where the city’s political figurehead was as local officials scrambled to mitigate intense flood damage. Like other Southeast Michigan communities, last month’s intense rainstorm overwhelmed the city’s drainage systems, caused massive property loss for more than 10,000 homes and left sections without power for days. In Dearborn, the flooding also brought to light disparities between the city’s more affluent and working-class neighborhoods.

Mayoral candidate and City Council President Susan Dabaja held an informational town hall this week with residents and service department representatives to answer questions about sewage backups during rainfalls and flooded streets. Another mayoral candidate, State Rep. Abdullah Hammoud (D-Dearborn), had been actively aiding cleanup efforts in the city since the morning of the flood, organizing teams to service vulnerable residents.

In neighboring Dearborn Heights, the city’s first Arab American mayor, Bill Bazzi, updated residents on his administration’s response to the flooding through the city’s public information channels. He has also been touring damaged neighborhoods and had been seen on site meeting with county and state officials.

O’Reilly did attend a meeting on Thursday with Federal Emergency Management Agency (FEMA) representatives on their tour of the area to assess damage and help the state make a disaster declaration to secure federal assistance.

But O’Reilly’s public absence has been noted on more than a few notable occasions. The COVID-19 crisis led many Michigan mayors, like Hamtramck’s Karen Majewski, to give regular weekly COVID-19 updates, broadcasted through city social media. Not quite the case in Dearborn, one of the hardest hit cities in the region.

Osama Siblani, publisher of The Arab American News, told WXYZ that the mayor had been out of sight since the COVID-19 pandemic turned deadly. Residents also learned that the mayor had contracted the virus himself, but only while he was in recovery.

“Fifty six people in Dearborn died at that time, and the mayor was nowhere to be found,” Siblani said.

“Somebody else is doing the job, but not the mayor,” he added. “He’s not reachable. The president came here and he didn’t even say anything.”

Siblani was referring to President Biden’s first visit to Dearborn as president this year. O’Reilly was in attendance during a reception at Ford’s new automated vehicle center, but turned down an opportunity to speak at the event.

Several attempts to reach him by the local news channel were unsuccessful. WXYZ also noted that O’Reilly had skipped an emergency City Council meeting following the flood.

City Councilwoman Leslie Herrick, who is running for reelection this year, had told WXYZ that Council had not been notified of any change in the mayor’s health status.

Dearborn mayoral candidate and former Council member Tom Tafelski recently spoke with The Arab American News about O’Reilly’s abilities to perform his duties as administrator and spokesperson for the city.

“Jack O’Reilly clearly has not been to his full capacity for the last three years,” Tafelski said.

He even questioned a recent endorsement by the mayor.

“There was a piece that came out where Jack O’Reilly endorsed a candidate and I’ve seen his signature a thousand times, and that was not Jack O’Reilly’s signature,” Tafelski said.

In keeping with my lifelong service to Dearborn residents and stakeholders, I want you to know I am managing a health issue that has impacted my ability to attend public engagements and make public comments as frequently as I had done over the past 31 years in office.

I continue to completely fulfill administrative responsibilities required in the Dearborn City Charter.  I am working in the office every day and participating in high-level meetings regarding city operations.

I am sharing this news now because I want our residents to have confidence that the city is doing everything possible to help them recover from the devastating storms of June 25-26, even if you are not seeing me on news reports. My style over the course of 31 years has been to concentrate on the work at hand and not actively seek the spotlight.

I have been focused on our massive deployment of city resources in response to the historic flooding.  I immediately declared a state of emergency on June 26 to give the city the authority to quickly respond in whatever manner was needed.

I empowered key city personnel with the most frontline expertise to carry out their cleanup operations in the most nimble and effective way. The result: An ongoing recovery effort that has been unbelievably successful. Flood-damaged materials were removed from piled up curbs of more than 12,000 homes in just 10 days.

I continue to advocate for residents by meeting with state and federal officials in hopes of having a presidential disaster declared, which will bring federal relief funds directly to our impacted homeowners.

Throughout my career, I often have designated my department directors and others as spokespeople, asking them to use their expertise to explain issues to the public and the media. This now will be the regular practice moving forward.

I am asking you to please respect my privacy regarding personal health matters.

I believe I have served the city well in my 31 years in office as mayor and Council president, and I look forward to continuing my public service for as long as I am able to do so.

It is still an honor and my privilege to carry on my family’s legacy of public service in this city and I want the residents of Dearborn to know that they will always be a priority in my life.